Spontaneous channelled communication was received as guided writing from a higher stream of consciousness in 1991. This constant contact guiding spiritual communities over the next three decades. I felt the words should be published but was told ‘not at this time’ until in December 2021 I was instructed to make the guidance public under Message for Humanity as ‘this is the time’. Now we see why.

YOUR HOME BEYOND THE STARS

This is your home, your rightful home, your home beyond the stars…Why do you worry, fret and fuss at daily tiresome trials? Did you forget that you are mine and I am yours, at 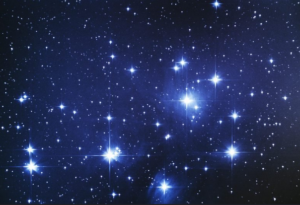 home beyond the stars. You are away a little time from your celestial home yet never really further than the closing of your earthly eyes. Close them now that you might see again perpetual realms.  The brightness and the splendour and the love in which you are held.

In love the task was undertaken, in love it will be fulfilled, do not despair and worry child, you do not struggle on alone….know that I am here. With eyes now opened you can see the helpers on life’s path, angelic presence all around and friends from ages past. To keep communion with the soul is all that now is asked, all other is illusion and makes a harder task.

Find time to sit in solitude, to gaze upon the stars, to call to starry families who now prepare your path. The way is lit with starlight, the soft illumined glow of those who also serve the cause of souls who are below. Some serve in darkness, some in light, ever counting candles lit in Gaia’s darkest night. As souls awaken from despair we see the tiny light become a flicker then a flame and then 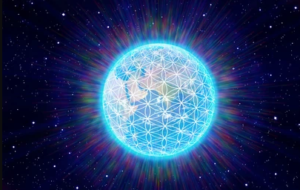 a candle bright. And from above we see the lights become a golden chain, a garland for the mother in her suffering and pain. To those below we say, Look up and rise above the dark, look down with us in hope and trust, see heavens dawning light.

To those who are the beacons from which the lamps are lit, we send our loving greetings and ask that you recall, the wealth of love and blessings which now surround you all. Look not upon the darkness for it will overcome, look now instead towards your home to see that we are one… As you daily travel onward to your home beyond the stars.

AN ACCEPTANCE OF CHANNELLED COMMUNICATION REQUIRES ACKNOWLEDGEMENT NOT ONLY OF A DIMENSION BEYOND THE PHYSICAL BUT THE POSSIBILITY THAT THIS CAN BE BRIDGED.

It is the means by which we receive data which is comprehensible yet otherwise inaccessible. It takes many forms, audible, verbal and written as well as creative expression transcribed as music or art work. Such communication can only occur when the mind or thought process is disengaged i.e. an altered state of consciousness. The receiver may be awake and aware but is functioning on a different frequency in which their faculties are attuned to a different wavelength. The accuracy of transmission is dependent upon the ability to sustain this level of detachment. If the thought process intervenes the frequency drops and content changes, influenced by the mind. The receiver has no awareness of what is being written and may have no memory of what has occurred. Channelling may be spontaneous or induced as in hypnosis  (Edgar Cayce) or the result of deep spiritual practice. It is a spiritual endeavour not a game and should never be undertaken without spiritual supervision.

This is very different from inspirational writing in which there may be a connection to higher states of awareness but the receiver remains awake and aware of what is written, retaining critical faculties to edit or to stop or start. In written channelled communication i.e. guided writing, the words are received unconsciously and automatically and at greater speed than normal, sometimes  without punctuation or spaces between the words, as a scroll, at other times in verse. The writing may be received with eyes closed and in a specific pattern e.g. curved lines which do not cross over each other. Writing may include language the person does not speak, historical facts of which they are unaware or prophetic or healing messages. At times there may be an awareness of a benign familiar presence of one who is guiding from etheric realms.

I had always intuitively felt that I would one day receive guided writing, nothing happened. In 1991 a series of profound events occurred leaving me very uncertain. One night as I made my way to bed, I heard an inner voice saying ‘Pick up the pen’. I paused before continuing up the stairs, then heard the voice again saying insistently ‘Pick up the pen’. This made no sense, I was tired but curious and decided to comply. I sat with a blank sheet of paper before me, pen in hand and waited for something to happen. I felt impressed to write the word ‘Greetings’ – this seemed too theatrical for my own comfort and I resisted… when the word came again I wrote it down. Another phrase came immediately. Sure that it would be meaningless I wrote it down thinking I would then go to bed ,however, I began to write quickly and the words became a continuous flow. As I wrote them down they seemed to be erased from my mind, if I started to think, they stopped. I seemed to have been writing for only a few moments when I put my pen down and glanced at the clock, some twenty minutes had elapsed. I had no idea what I had written and was surprised to read the words…Home Beyond the Stars. I had never written poetry or prose before, clearly this was not a product of my own logical thinking process. I had felt the presence of a friend, as if someone was standing looking over my shoulder yet also holding the pen. I felt reassured.

In the following days the communication continued in verse form and then progressed to direct Life Plan guidance outlining my future role in establishing spiritual communities, all of which occurred over a thirty year period. This was the beginning of contact which continues to the present day.