GOVERNMENT WARNINGS REMIND POPULATIONS ACROSS THE WORLD TO CONTINUE TO REMAIN AT HOME EVEN AS EASTER SUNSHINE TEMPTS SOME TO LEAVE.  RESTRICTION OF MOVEMENT AND SOCIAL CONTACT IS CURRENTLY THE ONLY MEASURE TO PROTECT AGAINST VIRAL CONTAMINATION.

Faced with whether to complain or comply with the enforced

limitation, we might pause to remember the story of Eyam, a Saxon village in Derbyshire, England ,where seventeenth century villagers set the gold standard for personal sacrifice. Villagers in the Peak District National Park are currently outraged that a steady stream of visitors have ignored government warnings to stay at home to tackle the coronavirus outbreak. Walkers saunter through the picturesque village, which is home to about 1,000 people, perhaps oblivious to its history as ‘the plague village’.

In 1666 the ‘Black Death’ swept through Europe eventually killing some 50 million people. There was no treatment and the disease was fatal. The only way to limit contagion was 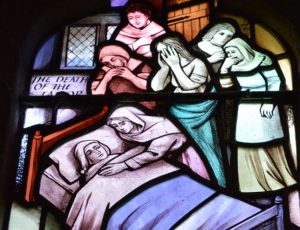 isolation.The disease had first reached Eyam when a bale of tailors cloth arrived from London where the disease had already killed thousands. The damp bale contained fleas carrying the plague. George Viccars a tailor’s assistant was said to have opened the bale and hung the cloth in front of the hearth to dry, unwittingly stirring the disease-ridden fleas contained within the parcel. He became the first victim.

Between September and December 1665, 42 villagers died and by the spring of 1666, panic swept them with many on the verge of fleeing their homes and livelihoods to save themselves. A newly appointed rector along with his predecessor called a village meeting, informing the parishioners that the village should be quarantined to avoid the plague spreading to nearby villages. They were informed that if they agreed to what was effectively a death sentence, the  Earl of Devonshire living nearby on the 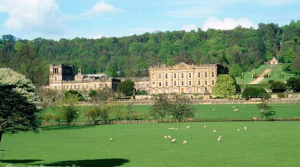 Chatsworth House  Estate had offered to send food and supplies.  The rector promised to remain with them and a collective decision was reluctantly made to agree. The  Earl of Devonshire who lived in the nearby Chatsworth House arranged for food and medicine to be left at the southern boundary of the village

The summer was hot and the plague spread. Throughout the following 14 months, human contact, especially with those outside of the village was basically eliminated but hardly anyone broke the agreement to stay. Instead of going to local markets for their supplies, Eyam’s residents left money in the stream outside their village in exchange for goods, vinegar was used as a disinfectant to cleanse the coins through fear of catching the disease. Families buried their own dead and when the stonemason died they engraved their own headstones on the graves.

Villagers watched helplessly from a 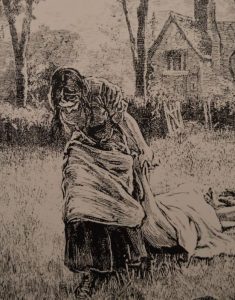 distance as Elizabeth Hancock buried her husband and six of her children in a field close to the family farm, dragging each body to the grave. 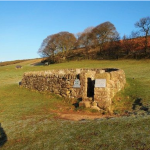 They had all perished in the space of just eight days. Elizabeth  was one of the few survivors.

Villagers met for worship in the open air, limiting their contact to small groups, perhaps the first example of ‘social distancing,   The rector’s  27 year old wife contracted the 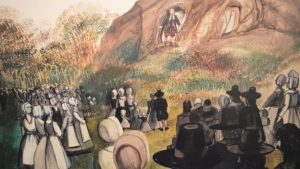 plague after tending to many of the dying. The couple went for a walk in the nearby hills to gain some respite; Elizabeth died the next day and he quickly followed. On November 1st Abraham Morten a farm worker in his later twenties became the last person to die, he is one of 18 of his family listed as victims in the Parish Register.

Unquestionably, the restraint shown by the Eyam villagers significantly reduced the spread to other towns and villages, saving countless lives. It is estimated that less than a quarter of the village population survived, sacrificing their lives for strangers in the nearby towns. 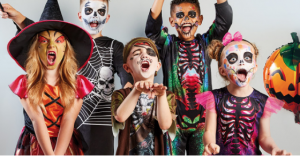 , encouraging them to knock on the doors of strangers, often without parental supervision, to  ask for sweets. The ‘trick or treating”   of Halloween is perceived as harmless fun, an opportunity to engage in shared community activities with little or no perception of the potential dangers. Today many US States have passed legislation to ensure that registered pedophiles remain in their homes during Halloween when they are not allowed to give candy to children. New York’s  “Halloween: Zero Tolerance”  law allows state investigators to make unannounced home visits, curfew checks, and phone calls to enforce the laws. In most states violation may incur a felony charge punishable by up to three years in prison. Just as we would not allow our children to venture out alone and unprotected in every day life, we should not invite the attention of those whose motives and intentions may be questionable – whether they reside in this world or another. END_OF_DOCUMENT_TOKEN_TO_BE_REPLACED

THE POLITICAL QUAGMIRE NOW CHALLENGING LEADERS OF THE  EU AND THE  UK, DEMONSTRATES THE HISTORICAL CONSEQUENCE OF CONTROLLING A COUNTRY FOR THE ECONOMIC EXPLOITATION OF THE NATIVE PEOPLE AND THEIR LAND. 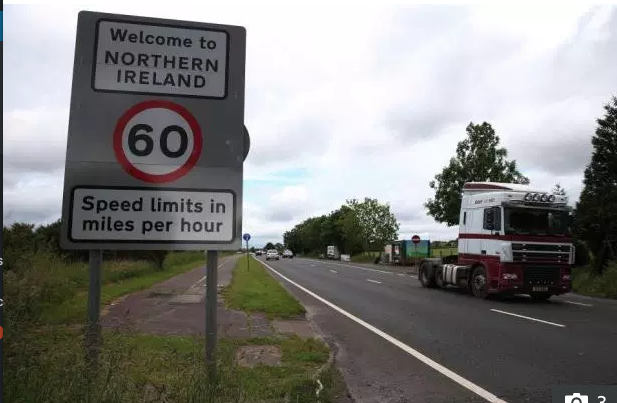 The Partition of Ireland  in 1921 created the invisible border which divides rivers, fields and houses, only the road signs written in English or Gaelic remind you that it separates one nation but two countries and two cultures. An estimated 30,000 people pass through 300 crossings daily. Current negotiations threaten much more than a return to border controls and Custom checks, the pending withdrawal of the UK from the EU threatens the Good Friday Agreement of 1998 which ensured power sharing by Northern Ireland and the Republic of Ireland.  Brexit negotiators intent on securing binding agreements acceptable to all, are mindful of border sensitivities and the sectarian divisions which the Good Friday Agreement largely resolved. END_OF_DOCUMENT_TOKEN_TO_BE_REPLACED