According to many spiritual traditions Life Waves emanate from the higher spheres via portals, allowing soul groups to journey together to experience life in 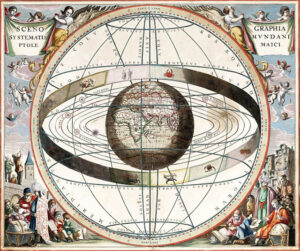 the physical world, through Cycles of time. This presents an opportunity for human consciousness to rise or fall in accordance with free will choices, inevitably negative as well as positive ones are made. While Free Will is the prevailing factor in soul progression, cosmic cycles exert a commanding influence. Put simply this chronology states that we are Time Travellers and our journey is measured in defined stages or Ages; a vastly different timetable than the one to which we in the West are accustomed. Indian, Egyptian and Mayan  records chart the history of humanity and are comparable.

The myopic vision of materialistic science considers the myth and legend of cultural groups throughout the world to be merely symbolic while Eastern tradition preserves the sacred text which is accepted as the spiritual history of mankind. Religous traditions, East and West, share a common theme of the rise and fall of previous civilisations with reference to cataclysmic fire and flood bringing about the fall of nations which had previously flourished. Jewish, Christian and numerous other Creation stories describe ‘The Great Flood’ and the story of Noah and his family’s survival and ancient Mesopotamian and Egyptian texts refer to the sinking of Atlantis at the end of the previous Age. Native American Hopi tribe tell of the seeding of mankind to the Earth foretelling an outcome of destruction, unless mankind learns to live in harmony with Creation.

Astronomy currently estimates the age of the Universe to be around 13 billion years, corresponding remarkably to  ancient  Hindu cosmology. The Vishnu Puranas are the oldest records known to mankind, the time scales are unimaginable, surpassing 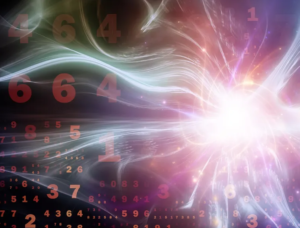 anything acknowledged by traditional historical data. According to this cosmology Time is divided into distinct Cycles or Ages, commencing with the origin of Creation by ‘The One Absolute Being’ or God. The texts state that a Universe endures for 4 Cycles, each of which lasts for 4.32 billion years, before a time of destruction and renewal. Such Ages referred to as Yugas are Satya/Golden Age, Treta/Silver Age, Dvapara/Copper Age and Kali/Iron Age.

The Law of Equivalence – Heartbeat of the Universe

ALL CREATION IS GOVERNED BY COSMIC LAW. PLANETARY CYCLES ARE MIRRORED AT THE PERSONAL LEVEL. THE 4,3,2 PATTERN  IS A KEY TO COSMIC EVOLUTION REFLECTED IN COSMIC RATIOS OF THE SUN, MOON AND THE EARTH. 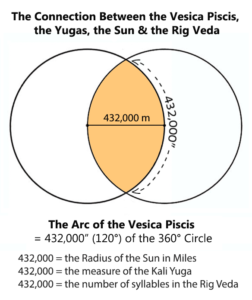 The optimum human heart beat is 72 beats per minute or 4,320  beats per hour.

432Hz tuning vibrates with the Golden Mean PHI and unifies the properties of light,time, space, matter, gravity and magnetism with biology, the DNA code and consciousness.

The cycles repeat as cosmic seasons, waxing and waning in accordance with celestial rhythms. Swami Sri Yukteswar, the guru of Paramahansa Yogananda, described the cyclical movement of celestial bodies and the impact upon the consciousness of mankind. ‘Our sun revolves around a seat of creative power, (The great Central Sun) as the sun with its planets and moons come to the place nearest this power centre, mental virtue is enhanced and mankind can comprehend the mysteries of spirit. When the sun in its orbit is furthest from this seat of power, the mind of man is disaffected and is then unable to grasp anything beyond the gross material world and as a result becomes materialistic.’

We are caught in a spiral of decline as the frequency is turned down to accommodate our choices. In the first stage or Age the energy that sustains is pure because we are in close proximity to the greatest light yet we have free will to make our own decisions, our accumulated error is reflected as a lowered vibration or a loss of purity of consciousness which in turn creates further error. As we progress to the next stage or

Age greater effort is required to sustain our spiritual connection as the negative momentum compounds the downward spiral. In the third stage or Age the negative momentum inhibits our ability to align to the positive and we become more and more led by the mental faculties, convinced that we are right because as spiritual awareness decreases we become mentally oriented. By the time we reach the 4th stage or Age (the Kali Yuga) we are struggling to maintain mental and emotional stability. Spiritual awareness is then vastly diminished and life is seen not as a spiritual journey but in intellectual and physical terms of acquisition of money, property and the pursuit of power. Materialism is the altar at which worship. Mankind is currently living through the Kali Yuga corresponding to the descent of consciousness of the masses.

The Vishnu Parana says of this time:‘The leaders who rule over the Earth will be violent and seize the goods of their subjects…. The leaders with the excuse of fiscal need will rob and despoil their subjects and take away private property. Moral values and the rule of Law will lessen from day to day until the world will be completely perverted and agnosticisms will gain the day among men”   The text continues:

The clearly observable decline in conduct correlating with lowered consciousness, egoic response and selfish choices in todays society, reflect the masses and a tipping point. Only an accelleration of spiritual awareness can limit the inevitable consequences, the survival of the human race will be determined by Free Will. For those 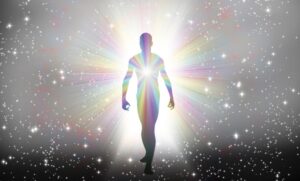 who wish a return to spiritual values  the means by which we choose to connect to our true identity as multi dimensional spiritual beings is a matter of personal choice. Our experiences are governed from birth by a cosmic clock which we can choose to acknowledge or ignore. At the end of the cycle of Yugas a planetary transition occurs through the elements of fire or water to usher in the new Golden Age confidently expected by many who while awakened are not always well informed.  The emergence of a new Golden Age for the planet is inevitable in its time, whether humanity will continue to reside on this earthly platform is debatable. As always it is for each one of us to choose a path of degeneration or rejuvenation.