HOPI PROPHECY ROCK: Oraibi  Arizona: The Hopi believe that there have been 3 worlds before this one and that we are inhabiting the 4th world of creation. Their legends tell of those who were saved from the Great Flood who made a sacred covenant with the Great Spirit.   Ears of corn of different sizes were placed before the leaders of the four different racial groups  each was to choose which would be their food in this world. The Hopi waited until last and picked the smallest ear of corn. At this, the Great Spirit said: “It is well done. You have obtained the real corn, for all the others are imitations in which are hidden seeds of different plants. You have shown me your intelligence; for this reason I will place in your hands these sacred stone tablets, Tiponi, symbol of power and authority over all land and life to guard, protect, and hold in trust for me until I shall return to you in a later day, for I am the First and I am the Last.”

In time the Hopi forgot the teaching and began to fight. On the death of their leader his two sons were each given a set of Tiponi, and  instructed to carry them to a place to which the Great Spirit directed them.The elder brother was knowledgable and inventive and was told to go  to the east, toward the rising sun, and upon reaching his destination to start back immediately to look for his younger brother. This younger one, the Hopi had humility and simplicity and was told to maintain the sacred ceremonies and remain on Turtle Island [the Continental United States of America]. If the elder brother returned with the cross without the circle this would signify the loss of understanding of the sacredness of all life.

The legend is carved on the Hopi Prophecy rock. 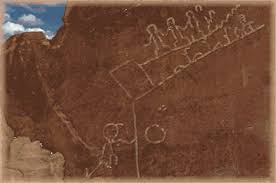 Great Spirit is depicted as the large figure on the left. The bow in his left hand represents his instructions to the Hopi to lay down their weapons. To his right is a vertical line representing thousands of years or cycles of time. The point at which the great Spirit touches the line is the time of his return. The “life path” the people will follow divides into two. The lower, narrow path representing  Life in harmony with nature as lived by the Hopi, the wide upper road represents the path of the white man’s scientific achievements. The circle to the right represents the unity of life,  the cross above  is Christianity and the bar leading to the two paths, the coming of the white settlers.The four small human figures on the upper road represent, on one level, the past three worlds and the present; on another level, the figures indicate that some of the Hopi will travel the white man’s path, having been seduced by its glamour. 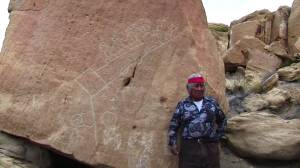 The two circles on the lower Path of Life are the “great shaking of the earth” (World Wars One and Two).The swastika  in the sun (an ancient symbol representing balance) and the Celtic cross representing unity are two helpers, the True White Brother. The short line that returns to the straight Path of Life is the last chance for people to turn back to nature before the upper road disintegrates and dissipates. The upper path peters out in a zig zag line to show the end of the cycle, the bar which joins the lower and the upper path is a last opportunity to follow the cosmic laws which govern the universe.The small circle above the Path of Life,  is the Great Purificatio, a cleansing for the Earth, a rebalancing to herald the next cycle and the eternal  Path of Life. The Hopi 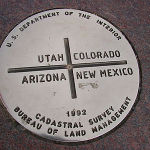 shield in the lower right corner symbolizes the Earth and the Four-Corners area where the Hopi have been reserved. The arms of the cross also represent the four directions in which they migrated according to the instructions of the Great Spirit.

Hopi Chief Dan Hevehema speaks of the prophecies given by The Great Spirit.

“There are prophecies to give to you now at this closing of the Fourth World of destruction and the beginning of the Fifth World of peace. He gave us many prophecies to pass on to you and all have come to pass. This is how we know the timing is now to reveal the last warnings and instructions to mankind. Ancient cultures are being annihilated. Our people’s lands are being taken from them, leaving them no place to call their own. 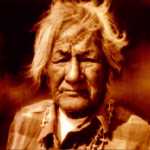 Why is this happening? It is happening because many have given up or manipulated their original spiritual teachings. It is because of this great sickness-called greed, which infects every land and country that simple people are losing what they have kept for thousands of years.

Now we are at the very end of our trail. Many people no longer recognise the true path of the Great Spirit. They have, in fact, no respect for the Great Spirit or for our precious Mother Earth, who gives us all life. We are instructed in our ancient prophecy that this would occur. We were told that someone would try to go up to the moon: that they would bring something back from the moon; and that after that, nature would show signs of losing its balance. Now we see that coming about. All over the world there are now many signs that nature is no longer in balance. Floods, drought, earthquakes, and great storms are occurring and causing much suffering.

This land which people call the Land of the Freedom celebrates many days reminding people of the world of these things. 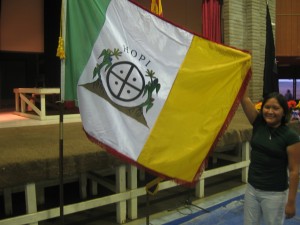 Yet in well over 200 years the original Americans have not seen a free day. We are suffering the final insult. Where is the freedom which you all fight for and sacrifice your children for? Is it only the Indian people who have lost or are all Americans losing the very thing which you original came here to find

We now stand at a cross road whether to lead ourselves in everlasting life or total destruction. We believe that human beings spiritual power through prayer is so strong it decides life on earth. Be well, my children, and think good thoughts of peace and togetherness. Peace for all life on earth and peace with one another in our homes, families and countries. We are not so different in the Creator’s eyes. The same great Father Sun shines his love on each of us daily just as Mother Earth prepares the substance for our table, do they not?  We are one after all.  Chief Dan Evehema