IN A WEEK WHICH SAW THE PAROLE BOARD DECISION TO RELEASE THE PERSON CONVICTED OF THE ASSASSINATION OF SENATOR ROBERT KENNEDY AND  PRESIDENT BIDEN’S UNDERSTANDABLE  REPRISAL THREATS IN AFGHANISTAN TO YET ANOTHER ENEMY  “WE WILL NOT FORGIVE, WE WILL NOT FORGET, WE WILL HUNT YOU DOWN AND MAKE YOU PAY”  WE ARE LEFT TO CONSIDER THE MEANING OF JUSTICE, MERCY, COMPASSION AND FORGIVENESS.

The assassination of President John F Kennedy on 22nd November 1963, sent shock waves around the world. As America reeled, another giant arose on the world stage. In the face of bigotry and hatred Martin Luther King preached a doctrine of non violence. On April 4th 1968, it fell to Senator Robert F Kennedy, brother of the slain President to announce to a mainly black crowd in an Indianapolis park that King too had been assassinated. His plea for peace is widely regarded to be one of the major speeches in American history.

INITIALLY, A RELUCTANT PRESIDENTIAL CANDIDATE,  BOBBY KENNEDY, WHO SERVED AS UNITED STATES ATTORNEY GENERAL FROM 1961 TO 1964, HAD FINALLY BEEN PERSUADED TO RUN, ANNOUNCING HIS CANDIDACY ON MARCH 16 1968.

By June 5th he had won five out of six presidential primaries. With an ecstatic crowd 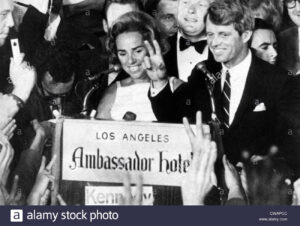 chanting “We want Bobby” inside the Ambassador Hotel, he rallied them with what would be his final message ‘now let’s go on to Chicago and let’s win there”. As Kennedy moved through the hotel kitchens accompanied by his wife Ethel, pregnant with their 11th child, he was shot  and fatally wounded. Several others who accompanied him were also shot but recovered. He was heard to ask ‘Is everybody all right?” as he lay dying before being rushed to hospital but was pronounced dead at 1.44am.

Sirhan Sirhan, a 24 year old Palestinian was restrained by witnesses at the scene  with a .22-caliber revolver in his hand.  Karl Uecker, an Ambassador employee who was escorting Kennedy through the pantry, testified that he grabbed Sirhan’s wrist and pinned it down after two shots and that Sirhan continued to fire wildly while being held down, never getting close to Kennedy. A waiter and a Kennedy aide also said they tackled Sirhan after two or three shots. Sirhan’s family were migrant Palestinian Christians, forced from their Jerusalem home by the Arab-Israeli War in 1948, the motive was said to be anger at Robert Kennedy for supporting military firepower to Israel. The attack took place on the 1st anniversary of the start of the Six-Day War.

At trial, defence lawyer Grant Cooper, made the controversial and widely criticised decision not to contest the charge that Sirhan fired the fatal shot. Instead, he tried to avoid the death penalty by arguing  “diminished capacity”,  a standard tactic by attorneys in death-penalty cases. This required Sirhan to admit to firing the gun even though he has always maintained that he has no memory of the events. Midway through Sirhan’s trial, prosecutors provided his lawyers with an autopsy report that launched five decades of controversy:

The Los Angeles coroner found powder burns on the senator’s jacket and on his hair, indicating shots fired at close contact. Kennedy was shot at point-blank range from behind, including a fatal shot behind his ear but Sirhan was standing in front of him. Several other witnesses stated he was not close enough to place the gun against Kennedy’s back and provided more proof insisting that a second gunman was involved.

SIRHAN WAS CONVICTED  OF KENNEDY’S MURDER AND GIVEN THE DEATH PENALTY. WHEN CALIFORNIA ABOLISHED CAPITAL PUNISHMENT IN 1972, HIS SENTENCE WAS COMMUTED TO LIFE. SIRHAN’S PAROLE APPEALS HAVE BEEN REPEATEDLY REJECTED DESPITE NEW EVIDENCE EMERGING OVER THE YEARS, THAT AS MANY AS 13 SHOTS WERE FIRED  ALTHOUGH HIS GUN HELD ONLY 8 BULLETS.

After months of research  into the assassination and viewing police and autopsy reports,  Robert Kennedy Jnr visited Sirhan Sirhan in prison.  Kennedy had become convinced that there was a second gunman and that it was not Sirhan 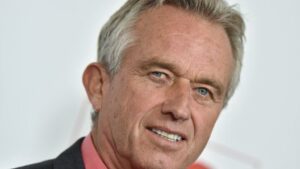 who killed his father. He explained “I went there because I was curious and disturbed by what I had seen in the evidence… I was disturbed that the wrong person might have been convicted of killing my father. My father was the chief law enforcement officer in this country. I think it would have disturbed him if somebody was put in jail for a crime they didn’t commit.”  Kennedy, himself a lawyer, called Sirhan’s trial  “really a penalty hearing. It wasn’t a real trial. At a full trial, they would have litigated his guilt or innocence. I think it’s unfortunate that the case never went to a full trial because that would have compelled the press and prosecutors to focus on the glaring discrepancies in the narrative that Sirhan fired the shots that killed my father.”

At the Parole hearing on 17th August 2020,  Robert Kennedy Jnr wrote in favour of parole. He said he had been moved by Sirhan, “who wept, clinching my hands, and asked for forgiveness” when they met in prison. “While nobody can speak definitively on behalf of my father, I firmly believe that based on his own consuming commitment to fairness and justice, that he would strongly encourage this board to release Mr Sirhan because of Sirhan’s impressive record of rehabilitation.” Paul Schrade, an aide to Robert Kennedy who was among five wounded in the 1968 shooting, also spoke in favour of release. He had previously spoken on Sirhan’s behalf at his  parole hearing in 2016, when he apologized for not coming forward sooner to advocate for Sirhan’s release and exoneration. Douglas Kennedy, a toddler when his father was killed in1968, said he was moved to tears by Sirhan’s remorse and said he should be released if he’s not a threat to others. “I’m overwhelmed just by being able to view Mr Sirhan face-to-face,” he said. “I think I’ve lived my life both in fear of him and his name in one way or another. And I am grateful today to see him as a human being worthy of compassion and love.”

Appearing by video from a San Diego county prison, Sirhan acknowledged he had been angry at Kennedy but still maintains he has no memory of the shooting. 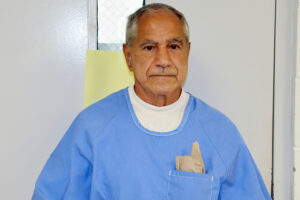 “Senator Kennedy was the hope of the world … and I harmed all of them and it pains me to experience that, the knowledge for such a horrible deed, if I did in fact do that.” Sirhan said he had learned to control his anger and was committed to living peacefully.  Because of laws passed in 2018, the board was required to take into account the fact that Sirhan suffered childhood trauma from the conflict in the Middle East, committed the offence at a young age, is now elderly and has served 53 years.  When asked how he feels about the Middle East conflict today he broke down crying and was temporarily unable to speak, saying he doesn’t follow what’s going on in the region but thinks about the suffering of refugees. “The misery that those people are experiencing. It’s painful”. If released, Sirhan could be deported to Jordan but said he was too old to be involved and would detach himself from it.

THE PAROLE BOARD FOUND THAT SIRHAN NO LONGER POSES A THREAT TO SOCIETY, HIS CASE IS CLOSED. THE GOVERNOR HAS 30 DAYS TO UPHOLD, REVERSE OR MODIFY THE DECISION. HIS LAWYERS ARE NOW LAUNCHING A BID FOR AN EVIDENTIARY HEARING BY THE INTER-AMERICAN COURT OF HUMAN RIGHTS. SCHRADE IS HOPING THAT THE INNOCENCE PROJECT WILL TAKE UP THE CASE.

The Parole Board’s decision has bitterly divided the Kennedy family. Two of Bobby Kennedy’s children have called for a reinvestigation, believing there was a second gunman. Robert Kennedy Jnr, 64, said he now supports the call for a reinvestigation of the assassination, led by Paul Schrade, the aid who was shot in the head as he walked behind Bobby Kennedy. Kathleen Kennedy Townsend, former Maryland lieutenant governor and the daughter of Robert Kennedy Jnr,  is now expressing doubts, too saying – “Bobby makes a compelling case… “I think [the investigation] should be reopened.”  Since 1974, Schrade has led the crusade to try to persuade authorities  to reinvestigate the case asking: “Why didn’t they go after the second gunman? They knew about him right away. They didn’t want to know who it was.”

Questions about the case arose almost immediately following the trial, resulting in hearings and reinvestigations as early as 1971 by the district attorney, the police chief, the county board of supervisors and the county superior court. Many of them focused on the ballistics of the case, starting with the Coroners finding that Kennedy had been shot from behind, which Sirhan’s lawyer didn’t raise in his defense. There were discrepancies over ballistics. Lead crime scene investigator DeWayne Wolfer testified at trial that a bullet taken from Kennedy’s body and bullets from two of the wounded victims all matched Sirhan’s gun, while other experts said they had markings from different guns and had different manufacturers. An internal police document stated –  “Kennedy and Weisel bullets not fired from same gun”  and “Kennedy bullet not fired from Sirhan’s revolver.”

IN 1975 A LOS ANGELES JUDGE CONVENED A PANEL OF 7 EXPERTS WHO EXAMINED THE THREE BULLETS AND RE-FIRED SIRHAN’S GUN. THE PANEL CONCLUDED THAT NO MATCH COULD BE MADE.

Though Los Angeles authorities had promised transparency in the case, the police and prosecutors refused to release their files until 1988 which produced a flood of new evidence for researchers. Among the material was an audiotape. In 2005, audio engineer Philip Van Praag said the tape revealed that about 13 shots had been fired. Van Praag said recently that he was able to establish that two guns were fired, that they fired in different directions, and that some of the shots were so close together they couldn’t have been fired by the same gun. He could not confirm whether13 shots were fired but there were certainly more than the eight contained by Sirhan’s gun. 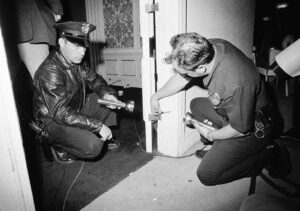 Charles Wright, a police technician, and officer Robert Rozzi inspects a bullet hole discoverd in a door frame in a kitchen corridor of the Ambassador hotel in Los Angeles near where Sen. Robert F. Kennedy was shot and critically wounded June 5, 1968. Bullet is still in the wood. (AP Photo/Dick Strobel)

A door frame at the Ambassador Hotel had bullet holes with a bullet still in the wood.This  along with the number of bullets retrieved from the bodies of Kennedy and the others who were wounded, takes the total number of bullets to more than 8, proving a second shooter. The evidence was dismissed and the door frame was destroyed by the lead investigator following the trial.

Kennedy was 14 when his father was shot. He was asleep in his dorm at Georgetown Preparatory School on June 5, 1968, when a priest woke him and told him there was a car waiting outside to take him home but didn’t say why.  Along with his older sister Kathleen and brother Joe, he flew to Los Angeles on Air Force Two; on arrival at Good Samaritan Hospital, a priest had already delivered last rites and his mother was there. “I took hold of his big wrestler’s hand,” he wrote in his book. “I prayed and said goodbye to him, listening to the pumps that kept him breathing. Each of us children took turns sitting with him and praying opposite my mom…My dad died at 1:44 a.m., a few minutes after doctors removed his life support. My brother Joe came into the ward where all the children were lying down and told us, ‘He’s gone.’ ”