THE RELEVANCE OF FLAGS OF NATIONS INSPIRES HEATED DEBATE. THEY ARE CONSIDERED EITHER TO UNITE OR TO DIVIDE. WE CELEBRATE OR DENIGRATE ACCORDING TO OUR PERCEPTION AND BELIEFS.

For some their flag is a symbol of national identity and pride while others believe that any flag encourages nationalism. Some see the cross as the symbol of faith for others the cross is the sign of the persecutors and not of the true church. The England flag has gained a particular notoriety due to past  association with the Crusades of the Middle Ages, it has always been manipulated for political reasons and most recently highjacked by right wing political factions.All of this is only one part of what the flag signifies.

ACCORDING TO ANCIENT MANUSCRIPTS ITS TRUE ORIGIN IS BOTH PROFOUND AND UNIQUE, LOST TO THE GENERATIONS WHO WAVE IT, OBLIVIOUS OF ITS SIGNIFICANCE. TO TRACE THE HISTORY WE MUST RETURN TO PALESTINE IN THE TIME OF THE CRUCIFIXION. 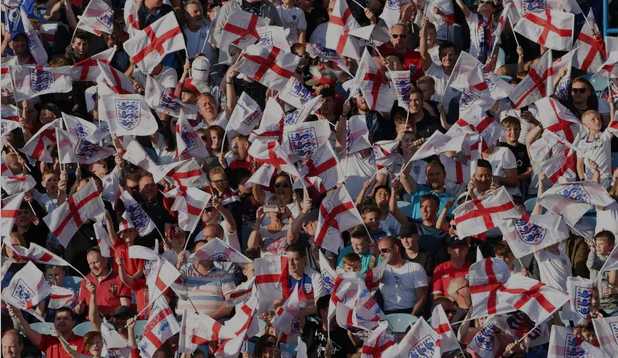 Joseph of Arimathea is mentioned in all four gospels and remembered as the man who provided his tomb in which to lay the body of Jesus  following the crucification.  He was so much more. As a follower of Jesus and also a voting member of the Sanhedrin Council responsible for the spiritual governance of the Jewish people, a body which officially wanted Jesus condemned to death, the affiliation had to be kept secret.  Crucified bodies were normally thrown into lime pits by the Romans but as the uncle of Mary, the mother of Jesus and therefore great uncle of Jesus, Joseph had a right to claim the body from the Roman Governor Pontius Pilate and did so.

There was another reason why Pilate might allow this, for Joseph was  an important man in his own right, well known to the Romans who referred to him as ‘Nobilis Decurio’, a position of high rank and status as Minister for Mines.  A  metal merchant, Joseph’s fleet of ships carried tin between Britain and Palestine. It is a well documented fact that Britain led the world in tin mining at this time and the islands were for a time afforded a degree of protection due to the valued trading connections which supplied Rome with the tin from which alloys were made. Numerous legends speak of the boy Jesus accompanying his uncle  on visits to England. This is the inspiration for Blake’s poem Jerusalem … ‘and did those feet in ancient times, walk upon Englands mountains green and was the Holy Lamb of God in Englands pleasant pastures seen’…

Following the crucifixion Joseph spent time in prison as a result of his allegiance to Jesus whose followers were being mercilessly persecuted and hounded and forced to leave Palestine by the occupying Roman authorities.  In AD37 along with a small band of disciples which included Mary Magdalene and Lazarus, he  set sail to seek refuge beyond the authority of Rome,  the islands of ‘Britaine’ on the farthest outskirts of the Roman Empire where Joseph was already well regarded.  They  landed in Marseilles, France, where they were met by a delegation of Arch Druids of France. In addition to Christians, Rome persecuted the Druidic Celtic tribes of Europe. An estimated 1 million Celts were killed in the region known today as France, with a further 1 million enslaved. This forged an unbreakable alliance between the British and French Celtic Druids. While internal tribal warfare was common among the Celts, they united fiercely against any foreign invader under their elected Pendragon, King Caradoc  (known to the Romans as Caractacus).  Lazarus and Mary remained in France and their links to the foundation of the early church there are historically documented. The main group continued on through Narbonne, Figeac, Rocamadour and Limoge to Marlaix where they were met by a delegation of British Druids led by Prince Aviragus of the royal Silurian tribe, of the Dukedom of Cornwall.

An interesting heraldic footnote: Among his many hereditary titles Prince Charles is ‘Duke of Cornwall’ a title inherited from the Celtic kingdom, he bestowed the title Duchess of Cornwall on his wife Camilla following their marriage.

Joseph and his companions were accompanied to England to ensure their safety. Crossing the English Channel they landed at Marazion Cornwall and the island of Ictis 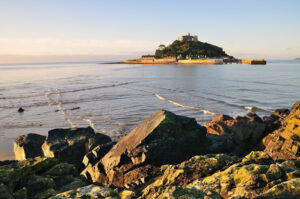 known today as Saint Michael’s Mount. Ictis was used by the Phoenicians, Greeks and  Romans trading with Cornish tin miners since ancient times, well known to Joseph whose ships would have docked there to load their cargoes of tin.

Travelling through Devon and Cornwall and the Mendip Hills, they followed what is today known as ‘The Michael and Mary Line’ a terrestrial ley line running SW across England. Boarding skiffs, (shallow hide covered rowing boats) they made their way via the River 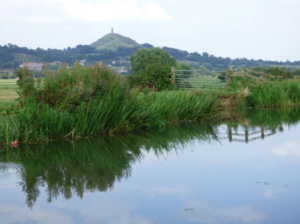 Brue and its tributary, the River Parret, through a marshy area of small islands known locally as Ynes Wyten or Avala ‘the place of apples’ a fruit sacred to the Druids. ‘Avalon’ is derived from Avala and known today as Glastonbury.

The party climbed a mound now known as Glastonbury Tor, here Prince Aviragus granted a Royal Charter of ‘a perpetual gift of 12 hides of land[‘ one hide for each apostle, representing 160 acres each, a sum total of 1,920 acres. The disciples settled and established their first church which later became an abbey. The 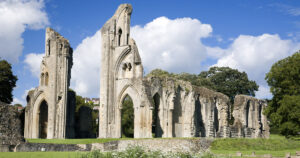 ‘Glastonbury Charter’  was the first land ever dedicated in the name of Jesus Christ. It is the only land in the British Isles designated tax free. This charter was renewed and enlarged by successive monarchs and is recorded in the Domesday Book, the historical record of land, property and goods commissioned by William the Conquerer in 1086.  The inscription in the Domesday Book reads: ‘The Domus Dei in the great monastery of Glastonbury, called The Secret of Our Lord. This Glastonbury church possesses in its own ville X11 hides of land which have never paid tax”

This Royal Charter has long been used to prove the seniority of the British church over the church of Rome, a fact confirmed by the Vatican which recognises Joseph of Arimathea as the first apostle to Britain. Precedence dictates seating arrangements at conferences and conclaves; in settling a dispute in 1931, the Vatican Curia confirmed that Britain is the senior Christian country with the worlds first Christian church outside of Palestine, a further means by which the historical records are preserved and can be traced and authenticated. 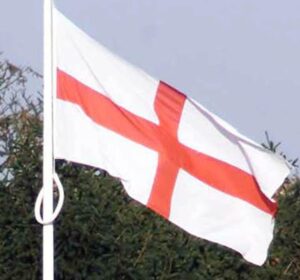 Aviragus  converted by Joseph of Arimathea.  In a gesture of gratitude for the gift of land, sanctuary, respect and friendship, Joseph presented him with an insignia and Standard, customarily worn on the shield of the Chieftain. This was the ‘long cross’ a red cross on a white background which, with its unequal arms, commemorated the cross on which Jesus was crucified. In 44AD Emperor Claudius invaded Britain and the Celtic tribes fought ferociously to defend their land and culture before the country was settled by treaty. 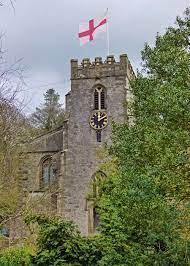 by his praying to know ye laws divine. And baptized him as write hath Nennius, the Chronicler in Brytain tongue full fine and to Christian laws made him incline. And gave him then a shield of silver white, a cross and longe and overthwart full perfete. These armes were used throughout all Brytain for a common syne, each man to know his nacion. And thus his armes by Joseph Creacion, full longafore Saint George was generate, were worshipt here of mykell elder date’

The ‘long cross’ flag was adopted as the flag of the Church of England when Henry Vlll broke with the church of Rome and is still flown from churches in England today. It was later adopted by many Christian nations in the Middle Ages. The red-on-white cross used extensively across Northern Italy today is derived from the long cross of St Ambrose, bishop of Milan between 374AD and 397, adopted as the flag of Milan in1045. A text mentioned in the Genovese annals for the year 1198, refers to a red flag with a depiction of St George and the dragon. The Genoese flag with the red cross was used alongside this “George’s flag”, from at least 1218.

The flag of England later became synonymous with the the flag of St George, the patron saint of England who was born around 280AD in Izmit, present day Turkey. He is believed to have been born of a Christian family, a high ranking aristocratic soldier of  the Roman Emperor Diocletians personal guard. He opposed the savagery of the Roman persecution and was executed on April 23rd 303AD for refusing to renounce his Christian faith. He is the patron saint of  many other countries including Aragon, Catalonia, Georgia, Lithuania, Palestine, Portugal, Germany, Greece, Moscow, Istanbul, Genoa and Venice. St George was considered to embody the values of courage and faith embraced by Christian tradition. 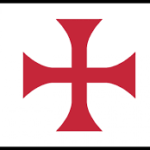 For many the cross remains irrevocably associated with the ignominy of the Crusades in the Middle Ages, initiated and directed by the church of Rome. The red cross was adapted as the Cross of the Knights Templar, a military Order of the church of Rome and worn on the chest of the knights. Crusaders were drawn from Christian European nations during the religous wars against Muslims and  so called heretics i.e. those who did not adhere to Catholic dogma. 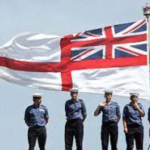 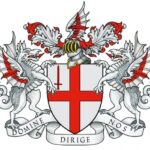 The heritage of a nation is conserved and displayed in Heraldry. The long cross is incorporated into the Coat of Arms of the City of London and is also the ensign of the Royal Navy, along with the Union flag of the United Kingdom.

When Joseph of Arimathea and his friends climbed Glastonbury Tor over 2,000 years ago the weary travellers planted their staffs to commemorate the journey, a path now known as  Wearyall Hill. Joseph planted his staff, made from the Levantine thorn of Palestine, it took root and became a tree over time and for centuries flowered at Christmas and Easter. It 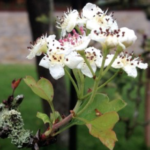 was desecrated by Oliver Cromwell’s troops during the Civil War 1642- 1651 and despite suffering repeated vandalism was replanted each time and continued to bloom. Sprigs were sent to the Queen each Christmas and today a sprig of the HolyThorn grows in the gardens of Highgrove the home of Prince Charles, a legacy of the nations Christian past and the promise of todays multi faith traditions.