WHAT DOES IT TAKE TO MAKE PEOPLE COMPLIANT?

There are many factors, one being Timing but perhaps the key one is Complacency. Compliance is defined as the act of obeying a request, an order or a command, implying a delicate balancing act between two players. Whether in personal relationship or the ways in which the state maintains order on behalf of its citizens, both parties are engaged in the interplay of power and powerlessness achieved through agreement, coercion or enforcement.

Where there is mutual agreement as in obeying a request, a balance is struck which benefits both parties; where there is discontent, negotiation and resistance is the appropriate response. If agreement can not be reached and the request becomes an order, powerlessness and antipathy results for the party which complies; equilibrium is disturbed and conflict inevitably follows.  A command is issued by the dominant player to ensure the status quo is maintained, this is the very definition of abuse of power.

Coercive compliance is enforcement by threat or intimidation. The imposition of power whether in personal relationship or by the state is facilitated by a )restrictive environment to exert control. Coercive compliance is utilised effectively by states to achieve a desired outcome, using a mix of promises and rewards, propaganda and intimidation with incarceration ultimately ensuring demands are met. This creates confusion, division and cognitive dissonance, as collective resilience is undermined, replaced by uncertainty and compliance. 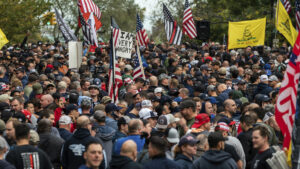 While determining an appropriate response to the very real threat of a pandemic, we must remain vigilant to the fact that coercive persuasion is an effective political grooming technique, more powerful and easier to impose under a restrictive environment. The isolation imposed by government restrictions in response to the Covid -19 pandemic increased participation in social media,  algorithms, bots and bias coding enhanced selective messaging. While many would  welcome regulation, increasing censorship of dissenting voices  is creating alarm and sounding the warning bell of history not to repeat the past.

Authoritarian societies arise in response to apathy and a creeping compliance and unwillingness to hold governments to account. Fear is the key, division is the strategy. Warning voices are silenced with censorship imposed under the guise of protection, as mainstream media parrots the perceived threat. Personal freedom is eroded as Lock Downs are enforced with quarantine camps already constructed.

HUMANITY HAS A HISTORY OF LOCKING UP DISSENTERS OR THOSE WHO BREACH THE SOCIAL STANDARDS OF THE DAY,  A MANUFACTURED CONSENT MADE POSSIBLE  BY CITIZENS WHO CHOOSE TO LOOK THE OTHER WAY. 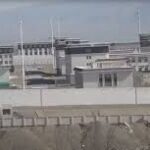 The euphemistically named Vocational Education and 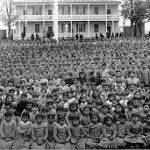 Training Centers in China where thousands of  Uyghurs are detained…. The Indian Residential school system, the horrors of which are only now being revealed, where thousands of indigenous children of Canada and America were forcibly removed from parents and  incarcerated for years.

The ‘Mother and Baby Homes’ run by Catholic clergy in Ireland, where pregnant unwed 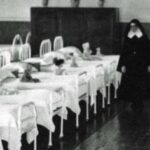 mothers were incarcerated throughout their pregnancy and beyond and forced to work in Magdalen laundries.  Government funded homes ran illegal adoption services placing children in America  with mothers coerced into consent or unaware of the adoption.

WE SHOULD HAVE A CARE BEFORE DISMISSING THE DISPARATE VOICES NOW BEING RAISED IN WARNING OF THE OMINOUS APPROACHING SIGNS.

As leaders struggle to balance health concerns with sustaining a global economy it is not vaccines but vaccine mandates and imposed detention which are causing the greatest division.

Justification for detention has always been that this is ‘for the greater good’. ‘Das höhere Woh’ was the Nazi slogan as German Jews were slowly divested of their rights before being shipped off to labour camps, while the German citizenry absorbed highly effective Nazi propaganda, choosing to look the other way as millions followed. In the chilling words of Herman Goering, a primary architect of the Third Reich Nazi Police State, who established the Gestapo secret political police and concentration Camps for the “corrective treatment” of dissenters….

“The people can always be brought to the bidding of their leaders – that’s easy. All you have to do is tell them that they’re being attacked and denounce the pacifists for lack of patriotism and exposing the country to danger. It works the same in any country”.