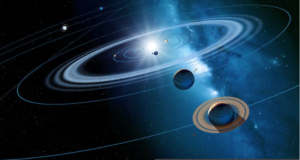 at the  2020 Solstice. Astronomers study celestial objects and phenomena using the physical sciences to explain  their origin and evolution.  Astrologers view the cosmos as a whole to study the impact of celestial bodies on the earth and on mankind as a microcosm of the solar system. Astrology is not predictive or fatalistic it simply indicates options.

Because of the orientation and tilt of their orbits, the eight major planets of the Solar System can never come into perfect alignment. The last time they appeared even in the same part of the sky was over 1,000 years ago, in the year AD 949, this will not occur again until 6 May 2492. The 2020 great conjunction of Jupiter and Saturn will be the closest since 1623 and the closest observable since 1226!  The planets have moved so close that their brightness merges together to appear as one bright light,  easily observable on 21st December. 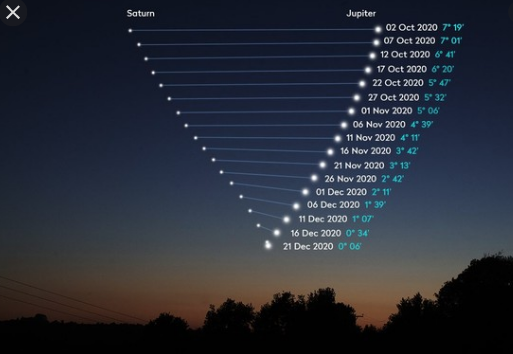 Johannes Kepler, a German astronomer and mathematician who discovered the laws of planetary motion in the 17th century was the first to propose the theory that the the ‘Bethlehem Star’ which led the Magi astrologer kings to Jesus was actually a triple conjunction of Jupiter and Saturn. Keppler described the two planets coming close together in the sky three times over a short period, a celestial phenomena which occurs due to an alignment between the Sun, the Earth, Jupiter and Saturn. Astronomers and scientists today are questioning whether this could be the return of the same astronomical event said to have heralded the birth of Jesus 2000 years ago.

Another theory is that the star was light from the birth of a new star, or Nova. There are records  from astronomers in the Far East – of a new star in the small, northern constellation of Aquila in 4BC which would have been [positioned] “directly over Jerusalem.”. Dr Robert Cockroft, manager of McCAllion Planetarium at McMaster University in Ontario believes a Nova to be “a good candidate” for the Star of Bethlehem.  “It can appear as a new star in a constellation and fade again over the following months” he explains. ‘It is also not too bright, explaining why we don’t have any records of it in the West”. Dr Cockroft suggests that if the Magi set out on their journey West to Jerusalem as tradition states, it would take many months to arrive. “by which time Aquila (and the new star) could have risen in the sky to appear in the south…Bethlehem lies due South of Jerusalem, allowing the Magi to ‘follow’ the star to Bethlehem”.