DORIS IS A REMINDER  OF THE NEED TO PRIORITISE THE CARE OF A GENERATION  WHO HAVE DEMONSTRATED SERVICE TO THEIR FAMILY AND COMMUNITIES.

Like many of her generation Doris learned about resilience early in life, it imbued her with an indomitable spirit.  Born in 1923, in the north of England, her teenage years were marred by war but she met and married a Canadian soldier stationed in England. At the end of the war when the Allied forces had returned home she travelled to Canada with their nine month old daughter to begin a new life. Sadly like so many war brides of the  time her hopes were dashed when the marriage quickly ended. Doris made the long lonely journey home to England to begin, instead, life as a single mother but later remarried and a second daughter was born.  Like most people she knew Doris worked as an operative in the Lancashire cotton mills, from the age of 15 until her early forties when the cotton workers lung disease, byssinosis forced her to seek other employment.

Doris used to say the ‘When God closes a door he opens a window’ and this proved to be a crossroads of choice for her. Lacking qualifications, she applied for work at the local hospital as a cleaner,  progressing to Ward Orderly before training as an Anaesthetic nurse, 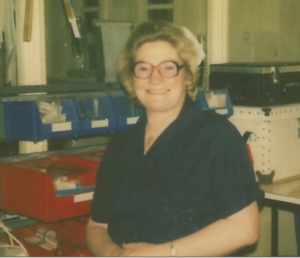 a post she held for some years. Doris worked  with the prestigious pioneering team who became world famous when they announced the birth of the first ‘test tube baby,’ Louise Brown, the fore runner of today’s IVF.  At the age of 50 Doris began a three-year course in midwifery training, studied and passed her finals to become a fully qualified midwife. After several years as a staff nurse she became a ward sister on the premature Care ICU, a job she was totally dedicated to.

Following her retirement Doris remained active, enjoying holidays abroad with her husband before his passing. The family expected her to find widowhood difficult, however, she gained a new lease of life. As a gifted writer, she wrote her autobiography which was published. As the family matriarch she helped raise her grandchildren and great grandchildren and finally a great great grandchild, keeping a daily journal and recording her daily life as a doting grandma, in prose.

I stand on the corner each day, wet or fine, and watch for that lovely great grandson of mine. He comes down the road with a smile on his face, on his dad’s shoulders, they set quite a pace but daddy must set off again, what a race. So off we go now, my great grandson and me to my house for breakfast and Children’s TV.  Ms Mallet, short stories and Sesame Street. Then shopping around, there’s always a treat, the best is the Roundabout, his favourite ride, he goes round and round, all the cars he has tried. Now it’s home time… he gives me a kiss. Back home to mummy, he’s waited for this. So I’m off on the bus with this tired boy of mine but I’ll be on the corner each day, wet or fine.

At the age of 82, it became evident that Doris was experiencing memory problems, she was diagnosed with Alzheimers at the age of 86 and made the transition from independent living to residential care. Doris was supported by a team of dedicated holistic therapists pioneering alternative approaches to health care by the Living Memory Research Trust and was delighted to take part in a video project to increase medical and community awareness. Doris unexpectedly became the teacher providing a unique client perspective. Project workers described how she had enriched their knowledge: “She helped me to know what it felt like to lose your memory, your ability to communicate and your independence because of Alzheimer’s.”

An articulate woman, when asked  to describe what  it feels like when you can’t remember, she replied. “It’s like you remember a little bit and then it stops and then it’s like another bit of film interrupts it, then you don’t know where you are. I finish up not understanding what I am seeing. It feels like shutting off. It’s like a blankness that you can’t see through. Like a door that won’t open for you.”   She described her feelings when this happens:  “ I feel a bit helpless. I can go on struggling and struggling with it but if you let go of it, sit down, have a cup of tea and let 15 minutes pass, then it’s gone and I’m back to normal again.”   Her advice was: “Leave me to struggle at the beginning with it and that will help me pull my brain together. Don’t you say anything until I ask you. The condition gets bigger and bigger if someone interrupts you. “ Asked what she found most difficult she said: “The only thing that agitates me with people is that they don’t take any notice of what you’re saying or they look like they don’t believe what you’re saying, as though you are romancing or something. Then it makes me shut up because it’s embarrassing. “ 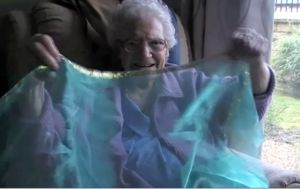 Doris eagerly participated in a series of videos as part of a therapist training programme, ignoring the camera and expressing herself animatedly as she took part in a sensory programme using aromatic oils, sound, colour and music.  She appreciated the opportunity to become a teacher and somewhat  assertively encouraged interviewers to  “go home and make yourself some notes about the questions you want to ask next time”. Even after experiencing a stroke, Doris was happy to continue with the video project despite her increasing disability and memory loss. 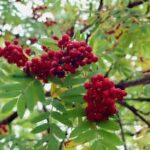 seasonal changes and watching the birds. Inevitably her illness progressed, yet more slowly than expected . After seven years Doris remained almost fully independent and mobile, causing the consultant neurologist to question whether the initial diagnosis had been correct. (confirmed by later brain scans in the  final stages of her illness). The self help Living Memory Alzheimers project (named Doris’s Day in her honour) has since  been used effectively by families and and carers and has been incorporated into residential therapy  programmes.

Doris passed away at the age of 93 and we planted a Rowan tree in remembrance. The Living Memory therapist team gave this fitting tribute:  “Our time with Doris became much more than a therapy session, she was our teacher, surrogate mother, grandmother and friend and gave much more healing than she received, all our lives were enriched through our connection to her. We loved her dearly and continue the work we began with her to ensure that her legacy lives on to give hope and practical advice to carers doing their best for those with this debilitating disease.  Thank you Doris