ARE WE JUDGED BY THE COMPANY WE KEEP?

There is every indication that Prince Andrew’s involvement in the Epstein scandal is more far reaching than many would like to suppose, causing some to question whether the otherwise inexplicable interview he gave to BBC television 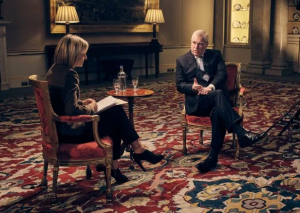 was a final act of desperation in light of what may be about to be revealed.  Jeffrey Epstein’s ‘Black Book’ contains the names and numbers of over a thousand high profile, people, including politicians, princes and  presidents, judges, lawyers, professors, philanthropists and benefactors, media and entertainment personalities with more than a few billionaires.  US lawyers are keen to interview them to help with their enquiries. Epstein’s homes were fitted with audio and video recording equipment believed 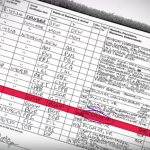 to be for the purpose of blackmail and extortion with reports of audio and video tapes in the posession of law enforcement officers. This week a judge ordered the unsealing of documents related to the previous court case, among them are the flight logs recorded by Jeffrey Epstein’s six pilots. Their content will confirm who flew on Epstein’s private jet, to where and how often. If the old adage ‘We are judged by the company we keep‘ still holds true, Prince Andrew’s feeble defence against accusations linking him as a potential co conspirator to a convicted pedophile are both alarming and insulting to the intelligence of any fair minded person.

With the alleged suicide of Jeffrey Epstein and the reopening of the case files related to his notorious plea deal of 2018, disturbing facts are emerging.

Prince Andrew’s 17 year association with Epstein, began in1999.  He welcomed Epstein and Ghislane Maxwell to Balmoral Castle in the Scottish Highlands and to Sandringham, the private residence of the Queen. In 2000 they both attended a birthday party at Windsor Castle hosted by the Queen to mark the shared birthdays of royals.  Andrew stated the invitations were extended to Ghislane Maxwell, Andrews’ friend, with Epstein merely ‘the ‘plus 1, as it were’. It should be noted that Maxwell has since been named by victims as Epstein’s procurer of young girls and an abuser in her own right. Epstein was invited to the wedding of Andrew’s daughter even after the scandal broke.

In  May 2006, a 14 year old girl accused Epstein of sexual assault, an arrest warrant was issued which led to a major investigation and Virginia Roberts (now Guffrie) testifying that she was trafficked by Epstein and forced to have sex with Prince Andrew on three occasions. The first occurred in March 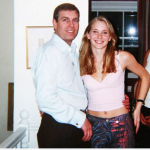 2001 at Ghislane Maxwells house in London after drinking and dancing at Tramps nightclub. Andrew questioned the authenticity of the photograph with his arm around the waist of Virginia Giuffre, (believed to have been taken there in March 2001)  as he is ‘not openly affectionate in public.’   Andrew’s denial that he even knew where the bar at Tramps was, in  a club he has visited regularly for years, stretches credulity… it is in fact adjacent to the dance floor.  The unflattering description by his accuser that he emerged from the dance floor sweating heavily, was dismissed as ‘impossible’ – due to an alleged medical condition (Hypohidrosis) which prevents sweating. This was described as a disorder linked to adrenalin overload while under fire during service in the Falklands War.  Unfortunately this has been dismissed by medics 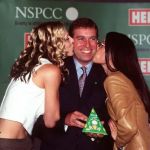 who state that this rare condition is not triggered by adrenalin but by acetylcholine. Prince Andrew, variously dubbed by the media as ‘the party prince’, ‘Randy Andy’ and  ‘Air miles Andy’  also stated he is at a loss to understand his partying image. Decades of  press photographs would seem to refute  all three denials.

Jeffrey Epstein was  later charged with sexual abuse and  trafficking under age girls but  pleaded to a lesser charge under a notorious plea deal. The judge ordered Prince Andrew’s name removed from court documents as ‘improper and impertinent’ sparking rumours of royal pressure. He was eventually convicted of prostituting minors in 2009 and given an 18 month sentence in a notorious plea deal which allowed him 12 hours ‘work release’ daily, 6 days per week. His cell door was left open and he used it only for sleeping  overnight. Epstein was driven to his private office daily by his chauffeur, visitors were unmonitored and Epstein continued to abuse young women at his office premises. Jail records show he was visited by one of his victims turned co conspirator on some 90 cccasions during his sentence.

Epstein was released from prison in July 2010 after serving 13 months.  A 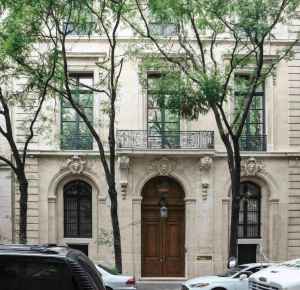 welcome home party  held at his New York mansion In December 2010  was attended by members of US media and entertainment elite. Prince Andrew, then 4th in line to the throne, was guest of honour. During the interview he admitted he  ‘was there’  but denied being guest of honour. Other guests included: Woody Allen, historically investigated for the sexual abuse of a 7 year old adopted daughter who had allegedly disclosed the abuse. George Stephanopolis, the former Clinton Campaign Manager who orchestrated the ‘Nuts for Sluts’ promotion to ‘destroy any woman ‘who accused Clinton of sexual misconduct during the Monica Lewinsky scandal. Charlie Rose, talk show host and former Anchor for CBS, later axed due to decades of sexual harassment of employees.

Perhaps the most damning aspect is Prince Andrew’s 4 day stay with Jeffrey Epstein at  his New York mansion in 2010, months after his release from prison,confirmed by the 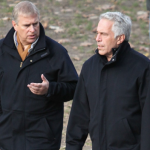 photograph of the two walking together in Central Park. Andrew stated they were never close friends but insisted on a personal visit ‘to do the honourable thing’ by speaking to him face to face to explain that  ‘due to the scrutiny, their contact was no longer appropriate’.  The honourable thing would surely have been, never to have had contact at all and to express regret and compassion during his interview for the survivors of a global trafficking network.

CORRUPTION AND COVER UP