DEMOCRACY: A SYSTEM OF GOVERNMENT WHERE THE CITIZENS EXCERCISE POWER BY VOTING

APARTHEID: A POLICY OR SYSTEM OF SEGREGATION OR DISCRIMINATION ON GROUNDS OF RACE.

Benjamin Netanyahu stated this week:   “Israel is not a state of all its citizens… 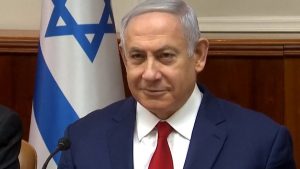 Millions of Palestinians expelled from their homes in the 1948 Nakba are prevented from returning.  Palestinians living in the annexed portions of the West Bank do not have Israeli citizenship or voting rights in Israel and are subject to movement restrictions by the Israeli government.  For 52 years, millions of Palestinians have been  subjected to a military regime which has facilitated the establishment of illegal settlements colonised by Israeli citizens able to vote creating resulting in the dispossession and  inequality of Palestinians, perpetrated through land control, immigration and resource distribution.  Israeli settlements create separate roads for Israeli and Palestinian citizens and Palestinians are subject to military checkpoints. Basic human rights are eroded on a daily basis, Hebrew is now the only official language with the Arabic language downgraded from an official language to a language with “special status”.

Nadim Rouhana,  a ‘conflict studies’ scholar wrote: “there are few honest observers in Israel who dispute that a Jewish state, by definition, privileges one group of citizens over another”. As Prime Minister Netanyahu, leader of the most right wing government in Israeli history, seeks a fifth term of office it was announced that he will be indicted on charges of bribery and breach of trust charges arising from three separate corruption charges.He denies all charges.

The institutionalised racial, political and economic discrimination which formerly oppressed the non white  population of South Africa, is now upheld in Israel and condoned by the United Nations whose members fail to protect the indigenous Palestinian people.

IS IT TOO MUCH TO ASK THAT THE UN DIRECTIVE (17 December 1981), OPPOSING APARTHEID IN SOUTH AFRICA, MIGHT APPLY TO PALESTINIANS IN ISRAEL?

Policies of apartheid of the Government of South Africa

As the world waits for a Nelson Mandela the Palestinians continue to be dispossessed and dehumanised.