Efforts to dismiss the recent incident at the Lincoln Memorial  as ‘Fake News’ by President Trump and others is a further example of the current extreme political polarisation in America. President Trump lost no time in tweeting in support of the students and inviting them to the White House, his views predictably retweeted. 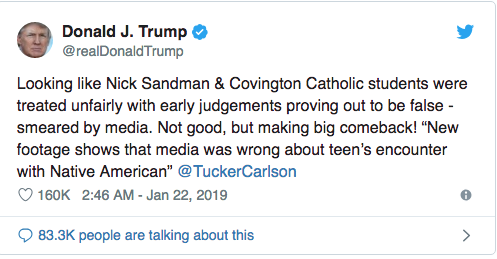 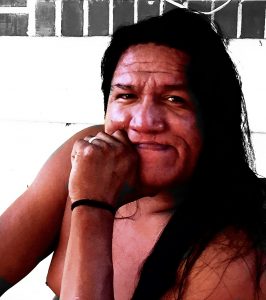 of the world has extended an invitation to attend a sacred Healing Ceremony  “to the students, their school, their families, their dioceses. All clergy are welcome. ..Nathan will be invited also. Our Elders and Ancestors say that ceremony is the best place we can be .This is where we must go as Indigenous. Covington MAGA hat young incident was sad.  But we must raise above, we must practice our walk. Turning our prayers into action. We show the world, compassion, love and Light. Let us create a space for these youth and their families. This affects us all, and all must be invited. I personally invite these youths to sacred healing ceremony where we will sit and talk with our hearts. We are not asking for you to say sorry. I am are asking you to come sit with us in ceremony and talk from your heart. This is where we must go. This invitation has no expiration date. We will be waiting for you in ceremony.”
Wayne William Snellgrove,
Saulteaux Tribe, Fishing Lake First Nation.

Those who choose to dismiss the warning signs of racial hostility rather than heed them, are as much at fault as those who whip up the media frenzy at every opportunity.  As the media attempts to unravel the facts to determine who or what initiated the incident, the fuller picture is emerging and in fact corroborates Mr Phillip’s account.  Context being everything, it is important to remember that on the day in question several protests were taking place by different groups including a Native American rally to protest against the Dakota Access Pipe Line which Nathan Phillips was attending, while the students of Covington Catholic High School were attending a March for Life anti abortion rally.  Longer versions of the earlier video confirm Nathan Phillips 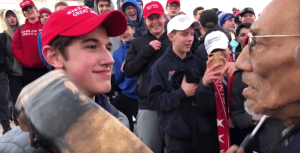 description of what occurred. Four black youths, identifying themselves as ‘The Hebrew Israelites’ who believe black Americans are God’s chosen people, were preaching their beliefs in a provocative manner and shouting racial and homophobic slurs towards a large group of white youths, many wearing ‘Make America Great Again’ hats.  Mr Phillips has described how his protest group were located in their designated area and were coming to the end of their rally, aware of the growing confrontation between the white and black youths which had been going on for some 2 hours, with the group of white youths now numbering some 200.

Nathan  Phillips believed this might escalate into violence and stepped forward between the two groups. The ceremonial drum which he was beating is a symbol of peace, an act of prayer,  ‘the way we communicate with God’. As so often happens when  a third party intervenes in someone else’s argument, Mr Phillips became the target with Nick Sandeman confronting him in an intimidating manner. The students  surrounded them and can be seen and heard ridiculing Mr Phillips with war whoops and ‘tomahawk chop’ gestures. While some have tried to dismiss this behaviour as youthful exuberance, other shouts heard on the video including ‘it’s not rape if you enjoy it’ testify to the hostile environment. Chase Iron Law, an attorney and a member of the Standing Rock Sioux Tribe has described how ‘tomahawk chop’ gestures and pseudo ‘war whoops’  incorporated into American culture are an example of ignorance which breeds intolerance. Whether intended or not they are  offensive and constitute a racial slur against native Americans.