The definition of a miracle is ‘an extraordinary and welcome event that is not explicable by natural or scientific laws and is therefore attributed to a divine agency‘.  Religion is a mystery yet science continues to establish evidence of miraculous events.  In a cynical world where religious ritual is widely dismissed and a belief in divinity is viewed incredulously, how then can we explain the laboratory experiments which leave scientists bewildered by their own results? While respect for all religious traditions is paramount, the Catholic belief in ‘Transubstantiation’ is perhaps one of the most difficult to accept, with many even among the faithful interpreting this sacrament as symbolic rather than literal.  Holy Communion is the foundation of the Christian church, a sacrament honouring the request of Jesus Christ  to his disciples at the meal he shared with them prior to his death which became 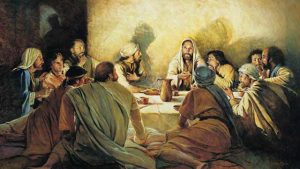 known as ‘The Last Supper’. The gospels refer to this event: ‘And he took bread, and gave thanks, and broke it, and gave unto them, saying, This is my body which is given for you: this do in remembrance of me.’  Luke 22:19……..  ‘I am the living bread which came down from heaven: if any man eat of this bread, he shall live for ever: and the bread that I will give is my flesh, which I will give for the life of the world.’ John:6:50. ……“This cup is the new covenant in My blood, which is shed for you”; “drink ye all of it”; “this do ye…in remembrance of me”; “and they all drank of it” (Luke 22:20, Matt.

The sacrament of Holy Communion represents communion with Jesus Christ , the wafer 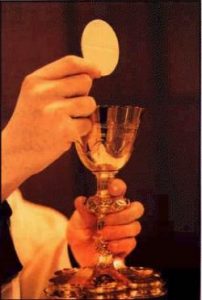 representing his body and wine representing his blood. The Roman Catholic church however interprets the sacrament literally, adherents believe that at the moment of consecration the wafer and the wine become the body and blood of Jesus as the priest intones the words: “Take this, all of you, and eat it. This is My Body which will be given up for you” …“Take this, all of you, and drink from it. This is the cup of My Blood, the Blood of the New and Everlasting Covenant. It will be shed for you and for all so that sins may be forgiven. Do this in memory of Me.”

As world events collide disastrously the masses remain unaware that science and technology are repeatedly confirming divine intervention occurring over centuries through what are described as Eucharistic Miracles. The following examples of many reported require rationalists to suspend belief and consider the rigorous scientific testing before dismissing  the events as naiveté, superstition or fraud for what can not be explained ‘must be ascribed to a deeper wisdom’.

The Miracle of Lanciano, Italy 1,300 years ago:  The bible tells how the impaired vision of  the Roman centurian who pierced the side of Jesus from the foot of the cross, was healed when the ‘water and blood’ streamed from the body.  He became a convert and left military service to preach about Jesus. He is remembered as St Longinus who reputedly came from Lanciano (the name derived from the lance).  Some 1300 years ago a monk  was celebrating mass in the monastery named for the saint, although devout he struggled to accept the dogma of Transubstantiation.  As he said the prayer of consecration the monk saw the bread turn into what appeared to be flesh and the wine into blood. Later the blood coagulated into 5 irregular shapes (representing the 5 wounds of the Passion of Jesus, nails in the hands and feet and the wound in the side), although of different size each weighed the same. The relics were placed in a reliquary but not hermetically sealed.  By 1574 they remained unchanged, no deterioration had taken place, the weighing was repeated with the same conclusion.

In 1970 Pope Paul V1 allowed forensic tests to be carried out on the Host, conducted by Odoardo Linoli head physician of the hospital of Arrezo,  a professor of  Anatomy and pathological histology, chemistry and clinical microscopy.  He was assisted by Dr Ruggerro Bertelli  professor of Human Anatomy at the University of Sienna. Professor Linoli determined that the flesh was human cardiac tissue, blood group AB.  In 1981 he repeated the tests using more advanced technology.  Findings again confirmed human blood, type AB “The Flesh, yellow-brown in color, has the structure of the myocardium (heart wall) and the endocardium, the membrane of fibrous-elastic tissue lining all the cardiac cavities”   Professor Linoli asserted that the sample “had the same properties as fresh human blood” he also confirmed that  had the blood been taken from a cadaver it would have deteriorated rapidly.  Both concluded that only the skill of a trained pathologist could have obtained such a sample, described as “a tangential cut of the heart, a round cut, thick on the outer edges and lessening gradually and uniformly to the central area. “Six tests have been conducted in total, each confirming the earlier findings. Today the flesh has not decomposed, the relic remains on the altar of the church at Lanciano.

The Bolseno Host – Italy 1263:  A German priest, stopped at Bolsena while on a pilgrimage to Rome.  He is described as being pious but one who found it difficult to believe in the doctrine of Transubstantiation.  While celebrating Holy Mass he had barely spoken the words of Consecration when blood started to seep from the consecrated Host and trickle over his hands onto the altar and the communion wafer.  At first he attempted to hide the blood, but then he interrupted the Mass and told the people what had occurred.  The pope ordered an immediate investigation and the host and the linen were placed in the cathedral of Orvieto.  In the mid 1990s forensic tests found  the blood was AB, in line with the Shroud of Turin, the Sudarium and other miraculous Eucharistic Hosts.

Sokółka Poland 2008 While celebrating Mass at the parish church of St. Anthony in Sokolka, a consecrated host fell from the hands of a priest, he interrupted the distribution of Communion, and in accordance with church protocol placed it in a small container of water. The host was expected to dissolve in the water, which would later be disposed of properly.  After Mass, Sister Julia Dubowska  placed the container in the safe located in the parish sacristy, only she and the pastor had the keys to the safe. On October 19, when she opened the safe, she noticed a delicate aroma of unleavened bread.  In the middle of the host—which was still largely intact was a curved, bright red stain having the appearance of blood; the water was untainted by the colour. The archbishop was notified and  they were 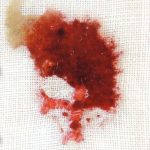 told to keep silent about the matter but to observe carefully to determine whether this was the result of an organic growth, a chemical reaction, or some other cause.  October 29th, the Host was  removed from the water and placed on an altar cloth which was then kept in the tabernacle for three years.  By January 2009 the host had dried out and appeared as a blood clot or stain.

An independent scientific study was ordered. In January 2009 a Histopathological report was published on two  studies by experts  of the Medical University of 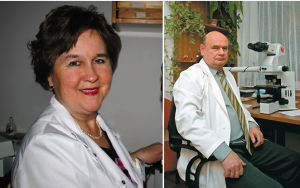 Bialystok, Prof. Maria Sobaniec-Lotowska MD and Prof. Stanislaw Sulkowski MD. To ensure credibility of the results the studies were carried out at the Department of  Pathomorphology and  analysed independently igoverned by the scientific norms and obligations in accordance with the directives of the Scientific Ethics Committee of the Polish Academy of Sciences. The two studies exhaustively described and photographed were in perfect agreement that the structure of the transformed fragment of the host  “is identical to the myocardial (heart) tissue of a living person who is nearing death… The structure of the heart muscle fibers is deeply intertwined with that of the bread, in a way impossible to achieve with human means”.  Prof. Sobaniec-Lotowska stated there could be no doubt that the fragments of flesh observed under the microscope belonged to the heart of a living person in his death agony. All the morphological changes known to medicine were here present.  Pathologist Miroslaw Rucki states: “Consequently, when I saw the photographs, I had no trouble distinguishing the structure of the Host and the muscle tissue and tiny blood vessels that appeared fused onto it. These ill-matched materials were so bonded together as to form a single, unbroken, and astonishing structure of  bread which is at the same time human flesh. To achieve such a fusion artificially is impossible”

Legnitz Poland 2013:  A host which had fallen to the floor during Holy Communion was picked up by the priest and placed in a bowl of water according to correct protocol. Ten days later when the priest went to dispose of the wafer he found it had kept its shape and a red spot had formed on the surface having the appearance of blood.  In January a Commission of Enquiry was begun, the host was placed on an altar cloth where it gradually condensed into the centre. Forensic testing was conducted by different authorities, histopathology examination suggested ‘most likely it would be the tissue of heart muscle’.  The Szczecin Institute of Forensic Medicine was approached for a second opinion, no details were given as to origin or previous testing.  A different method of testing was used which confirmed the sample to be of human blood with DNA identified. Cardiologist Dr Barbara Engel summarized: ‘The material was examined under UV rays and an orange filter and the result was clear.  We were able to identify muscle fibres that are typical of myocardial tissue with changes that often occur during a death struggle”.  The blood has since been re tested and confirmed as Group AB, the same as other sacred relics.

Despite the rigorous independent testing, duplicated results and the professional reputation of the scientists involved, skeptics inevitably continue to question results which defy the known laws of physics. A suggestion by one confirmed skeptic that if AB blood has indeed been found on a host, the police should investigate a possible murder, illustrates the nature of denial of the closed mind. This is understandable since the role of science is to examine and explain phenomena through those laws; acceptance would demand an acknowledgement that as Hamlet said:  ‘there are more things in heaven and Earth Horatio than are dreamt of in your philosophy’.