SCIENCE AND FAITH ARE NOT INCOMPATIBLE

The  human blood on the Shroud of Turin traditionally believed to be the cloth which wrapped the body of Jesus in the tomb has repeatedly been confirmed by DNA testing as blood group AB. Even more surprisingly, blood on the ‘Sudarium’ the cloth  which is believed by many to have covered the face of Jesus,  has also tested AB.

Jewish funerary tradition demands that if the face of a dead person was in any way disfigured, it should be covered with a cloth out of respect for the deceased. According to the biblical account Jesus was afforded a Jewish burial, 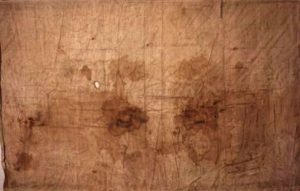 highly unusual as crucifixion victims were normally left on the cross for days with the body later deposited in lime pits. The biblical account of the disciples entering the empty tomb describes the shroud and the cloth lying separately.  ‘Then cometh Simon Peter following him, and went into the sepulchre, and seeth the linen clothes lie,and the napkin that was about his head, not lying with the linen clothes but wrapped together in a place by itself”. (John 20:7)

Skeptics understandably dismiss such biblical accounts, however, when Nasa scientists placed the image of the Sudarium and the shroud over each other they  matched  perfectly.  New research establishes some 20 points of correlation between the Sudarium and the Shroud of Turin.  The standard of proof used by most judicial systems around the world to confirm correlation between items requires only a match of 8 to 10.

The history of the Sudarium cloth is well documented, it was originally brought from Jerusalem and has resided in the Cathedral of Oviedo  in Spain since the eighth century.

Small bunches or bouquets of flowers were placed alongside the body of the man of the shroud, leaving the imprints and pollen grains on both cloths. Professor Danin identified 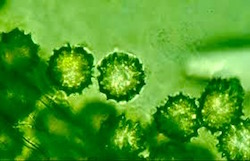 two pollen grains of the species Gundelia tournefortii as native to the Gaza Strip Israel. They are seen near the image of the man’s shoulder on the shroud and also found on  the Sudarium,  The pollen is adhered to the blood; this means that the pollen arrived on the shroud at the same time as the blood, not at some later point.  This fact is significant because it makes it possible to disprove the claims that the Sodarium of Oviedo is a Medieval fake since pollen grains are only visible through a microscope and were unknown in medieval times.

Juan Manuel Miñarro authored a study sponsored by the Spanish Center of Sindonology, (shroud investigation) and recently concluded: “We have come to a point where it seems absurd to suggest that ‘by happenstance’ all of the wounds, lesions and swelling coincides on both cloths,” Jorge-Manuel Rodríguez, centre’s president stated: “Logic requires that we conclude that we are speaking of the same person.”