Wars are driven by conquest and plunder. Resources are essential to the survival of empires and military might is essential to achieve access and occupation.

For almost four centuries until World War 1 most Arab countries were provinces of the Turkish Ottoman Empire and the Western part  of the Arab East was already under the rule of colonial France and England.  By 1915 amid the horrors of WW1 colonial powers began secretly staking their claims in the Middle East in the event that they won the war. As with the Balfour Agreement, conflicting promises were made by the British government to incompatible national groups concerning the same land areas. Britain had promised the Arabs an independent state in appreciation of their help in defeating the Turkish Ottoman Empire when Sharif Husayn a Hashemite Emir of Mecca had led an Arab revolt against the Ottoman Turks, in return he had been promised recognition as the head of an Arab Kingdom.

It was implied that this would include all of Mesopotamia, most of Syria and those parts of the peninsula of Arabia not already governed as British protectorates. This ignored an existing British alliance in central Arabia with Abdul-Aziz Ibn Saud, the Emir of Riyad, a leader of the militant Wahhabi Islamic movement who with British support ultimately became King Saud of Saudi Arabia, a controversial ally of the West today.

Under the 1916 Sykes-Picot agreement between the British and the French,  the principal considerations  were oil and communications. The pact gave France direct control over parts of Aleppo and a share of Beirut with a limited sphere of influence over inland Syria as an area where the Independent Arab state or states was to be established. The agreement had assigned Mosul in Northern Mesopotamia to the French and Baghdad and Basra in central and southern Mesopotamia to the British. Names only too familiar to us all today. There had been agreement that the Holy Land of Palestine would be under international administration but as the war came to a close in the Allies favour, Britain occupied much of Mesopotamia, and had already taken Palestine. The Sykes-Picot agreement was scrapped and the Allies met at San Remo to re-draw the map of the Arab world 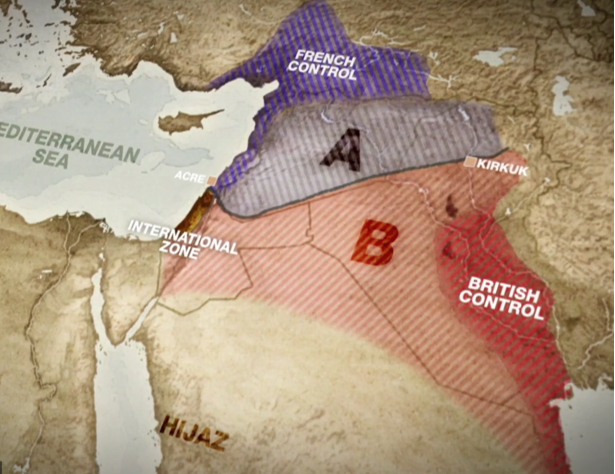 They drew a line between the Palestinian city of Akko near Haifa on  the  Mediterranean coast and Kirkuk in northern Iraq. The area south of the line was to be dominated by Britain and the area to the north, by France. Russia did not have expansionist   or annexation intentions in the Middle East, but stated that ‘Russia must ensure for itself  safe passage through the Black Sea straits’. France and Britain accepted their proposal and agreed land rights were apportioned.

Under the San Remo agreement Britain wanted the whole western coast of the Arabian Gulf plus the whole of Mesopotamia and to control the strip of land from there to Haifa. Britain would control a region of the north Arabian desert territory and an uninterrupted overland route from the borders of Iran to the Mediterranean. This was accepted by France which wanted the south east Turkish coast and greater Syria. France gave up her claim to the region of Mosul 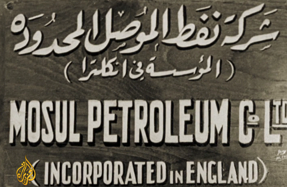 in return for a share in the Turkish Petroleum Company which had been confiscated by the Allies and reorganised as The Iraq Petroleum Company.The French were also given the southern parts of Damascus and Beirut and would now have a free hand in the whole area under a mandate of The League of Nations, forerunner of the UN.

The British obtained their goal of gaining the oil fields of Iraq, unimpeded access from there to the Mediterranean, control of the Red Sea and the Persian Gulf and the two vital maritime highways leading to the Indian Ocean.

It would prove impossible to keep the promises which had been made to the people of the Middle East. The  vision of an independent Arab State faded, at least for Western powers. Sharif Faysal was initially proclaimed King of Syria, however once the San Remo agreement had been concluded, the French, crushed his forces outside Damascus, forcing him to abandon his short-lived Syrian kingdom.  The British created another Arab kingdom out of the old Ottoman region which now became the Kingdom of Iraq. Sharif Faysal was acknowledged as  king to compensate their wartime ally for his loss. This was short lived as the Hashemites were driven out by his former rival  King Saud when he later conquered the whole of the Arabian peninsula, renaming it Saudi Arabia.