WHO WERE THE MAGI?

‘We three kings of Orient are, bearing gifts we traverse afar
Field and fountain, moor and mountain following yonder star’

A favourite carol tells of the three wise men who came to worship the child Jesus in the stable, a story retold for two thousand years.  Epiphany means ‘great light’ or ‘illumination’, referring in this instance to Jesus as the Light of the World. There are many interpretations 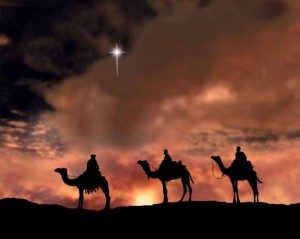 of who these visitors might have been. They are variously described as Kings of the East and Astrologers and are commonly referred to as the Magi.  The word Magi means ‘wise ones’ and relates to those who had a deep knowledge of the divine sciences including astronomy, astrology, numerology and the study of the celestial heavens and the ancient star maps.  Today’s term ‘magic’ is derived from it and used to describe something supernatural or beyond the ordinary.  Many intriguing questions arise.  If the story is true and the Magi did indeed come to pay homage to Jesus how did they know of his birth?  We are told they were guided by a star arising in the East which ‘went before them’ and finally ‘came to rest’ over the place where Jesus lay. Today Christians celebrate The Adoration of the Magi and the Feast of Epiphany on January 6th in remembrance of this event. If the Magi had ‘traversed afar’ from their own kingdoms, reputedly of the Persian Empire, this would have been a lengthy and even hazardous journey with much preparation required.  How could they possibly arrive within days of the birth…unless they had advance warning?

In that time the journey by camel from Persia to Jerusalem covered some twelve hundred miles and involved a journey of a minimum three to six months? 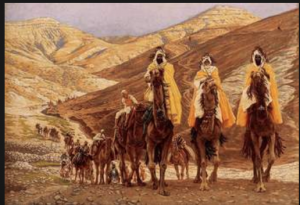 Travellers were required to cross the Syrian desert to Damascus, then south by what is now the Great Mecca Route, with the Sea of Galilee and the River Jordan to the west before reaching the crossing point near Jericho.

According to the story, on arrival in Jerusalem, the Kings began to enquire, ‘Where is he that has been born King of the Jews for we have seen his star in the East and have come to worship him?’ Word reached King Herod the Great, the ruler of Judea, who understandably became apprehensive.  He was not alone in this for factions within the Sanhedrin, the ruling Council which governed Jewish religious affairs, were also concerned about anything which might disrupt the status quo and threaten their position of power. Herod enquired of the Jewish Scribes and Pharisees concerning the prophecies as to where the expected Messiah was to be born. He was told ‘In Bethlehem of Judea for so it is written by the prophet.’

At this news, Herod summoned the Magi and asked them at what time the star had appeared.  Herod had his own court astrologers who, armed with this

information, could draw up a chart to ascertain whether or not this was truly an auspicious event.  Herod then directed the Kings to the town of Bethlehem and told them to ‘Search diligently for the child and when you have found him bring me word that I too may come and worship him.’

Since all kings in antiquity had astrologers as counsellors  some have wondered why Herod’s astrologers did not identify the Star, they have attempted to explain this by stating that astrology was not part of the Jewish culture. In fact diverse schools of Astrology had developed over the centuries according to individual cultural tradition, including the Jewish. The Jewish tradition did not accept the Persian school of thought which they considered to be of pagan origin. The arcane teachings of Persia had their origins in the Chaldean mystery schools of ancient Egypt, later embracing  Pythagorean principles based on solar and lunar cycles. It would not be surprising therefore that there would be differences of interpretation for Herod’s astrologers who, while anticipating the birth of the Messiah, did not practice according to Persian principles and failed to recognise the signs.

The Magi are frequently depicted in iconography wearing Persian robes, an 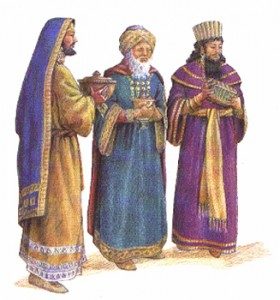 indication that their roots lay in the ancient teachings of the Zoroastrian priesthood established five centuries before the birth of Jesus.  Zarathustra, the founder of Zoroastrianism in Persia, prophesied that in time a king would arise from Abraham who would raise the dead and transform the world into a kingdom of peace.  When the Persians invaded Palestine in the 6th century AD the Church of the Nativity was spared because the Commander was moved by the depiction above the church entrance of the Three Magi wearing the garb of Persian Zoroastrian priests.

History has shown us that Herod’s intention was not to worship but to destroy the child.  The Magi, having found the place where Jesus lay, presented their gifts and ‘being warned in a dream not to return to Herod they departed to their own country by another way.’  When Herod realised that he had been misled by the Magi he flew into one of the rages for which he was renowned.  He was determined to eliminate what he perceived to be a rival to his throne and commanded that all male children under the age of two were to be killed.  This edict was carried out and is remembered by both Jews and Christians as the Slaughter of the Innocents, depicted in iconography and retold through time.  Some have doubted the historical accuracy of the story which was not given prominence by historians of the time.  The truth, however, is that vicious cruelty was a hallmark of Herod’s bloody reign and there were many massacres, murder and revenge being the order of the day; this was simply one more.  Once again Joseph, the husband of Mary, received a dream in which an angel appeared to him with a warning saying: ‘Rise, take the child and his mother and flee to Egypt and remain there until I tell you: for Herod is about to search for the child to destroy him… and he rose and took the child and his mother by night and departed into Egypt and remained there until the death of Herod.’

Herod was to die a slow and agonising death soon after this event, his death is believed to have occurred in the Spring of 4 BC at his palace on the Dead Sea.  He was succeeded by his son, Archelaus who the Jewish people did not wish to be their ruler and appealed to Caesar to give them an alternative king.  Caesar divided the land over which Archelaus had control, saying that he would only receive the royal title if he ruled virtuously which he failed to do, he ruled for seven years before being exiled to Gaul.  The Bible gives no account of the Flight into Egypt but states that on their return from Egypt, Joseph took Jesus and Mary to live in Nazareth ‘because Archelaus still reigned in Judaea.’  Archelaus was succeeded by his brother, Herod Antipas, who would become infamous at the time of the crucifixion.

Christmas Day – A Festival of Light

Star of Bethlehem – An Astrological Configuration