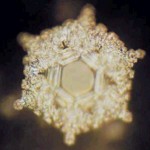 It is a Divine Principle that matrix patterns originate in a vibrational field of spirit to become encapsulated in matter, the density of  the physical world.  The ‘downloaded’ atoms and molecules vibrate as consciousness perceived or not. Animal life, vegetation and what we  consider to be inanimate objects such as rocks or crystals emit variable, measurable vibrational frequencies. Organic material has a finely tuned sensory awareness and responds to stimuli.

When the Japanese researcher Dr Masaru Emoto published his findings on the molecular construction of  frozen water crystals there was widespread incredulity. Not only was he able to demonstrate the unique formation, the blueprint  but that the inherent consciousness responded to environment.The research showed that the matrix pattern of the frozen samples was  maintained or changed by exposure to environmental pollution, music, to spoken and written words and even to thoughts. 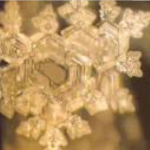 Those with an understanding of resonance are not surprised to see the effect of vibration as demonstrated through music.The crystal molecules also showed an abilty to restore the original pattern in favaourable circumstances. The potential consequences for mankind are unimaginable. 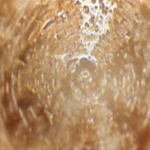 All life resonates at specific vibrational frequency,at the optimum level in a harmonious environment and at a reduced level in dissonance.

Dr Emoto was simply using todays technology to reveal what the ancients already knew.The same effect was demonstrated with words, either  spoken or written and taped to the sample. Angry or aggressive language distorts the crystalline pattern. 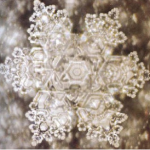 The filligree lacy pattern of  ‘I love you‘. A positive attitude and loving feelings maintain cellular structure in organic matter, including the human body.   The work of Bruce Lipton in his groundbreaking work Biology of Belief examines the link between belief systems and cellular response. Dr. Candace Pert’s book Molecules of Emotion demonstrated that thought patterns trigger the genes. 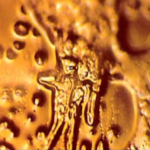 The frozen water crystals of ‘I will kill you‘. become an unstructured mass. The comparison might be made with cancer cells which lose their structure to become invasive when not aligned to the highest potential.

Dr. Emoto explains that the water molecule H2O consists of two atoms of hydrogen and one atom of oxygen. Emoto has concluded from this, that only if gratitude exists twice (H2) love can take an active shape and have an effect. He is convinced that  LOVE and GRATITUDE are the essential energetic components in maintaining wellbeing. 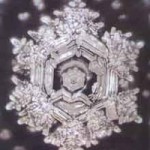 LISTEN IN ON MY  WEEKLY BLOG TALK RADIO PROGRAMME: