AS WORLD LEADERS COMPARE THE CHALLENGES OF A GLOBAL PANDEMIC TO THOSE FACED BY OUR PARENTS AND GRANDPARENTS IN WW2  WE ARE LEFT TO WONDER HOW WE WILL MATCH UP TO THEIR COURAGE AND SELFLESSNESS. 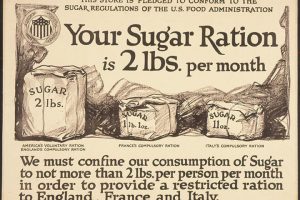 The most that is being demanded of us is to remain in our houses except for essential shopping, medical needs or the care of family and friends.  Yet for many it seems, this is too big an ask. Perhaps this is a timely moment especially for the younger generation, to remind ourselves of the sacrifices others made to ensure that we would have the freedom which many believe is a right rather than a privilege and a responsibility.

With the outbreak of WW2 in 1939,  rationing began, first petrol then food was severely 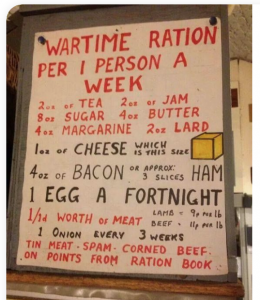 rationed. Everyone was issued with a ration book  to register at chosen shops. Shopkeepers were given only enough food for registered customers and housewives had to find inventive ways to make meals appetising. Rationing led to black markets. with additional non-rationed supplies ‘under the counter’, for those who could afford it. This was a lucrative industry with a maximum five-year jail sentence. Certain foods were unobtainable, many children had never seen a banana and their sweets were rationed until the end of rationing  in 1953. 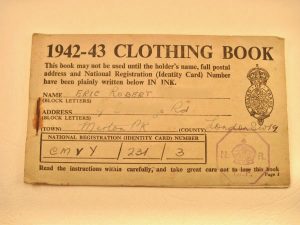 Clothing was also rationed with one set of clothes allowed per year which could only be bought with allocated coupons. A dress might be 11 coupons, a pair of stockings  2. Men’s shoes took 7 coupons, while women’s shoes were only 5. In 1945 an overcoat needed 18 coupons; a man’s suit, 26–29. People were encouraged to repair rather than replace their clothing, and a  generation  retained  sewing skills.

Operation Pied Piper: In the first four days of September 1939 in the UK nearly 3,000,000 people were transported from towns and cities in danger from enemy bombers, to places of safety. The government then took the decision to evacuate children from the cities to live with foster parents in the 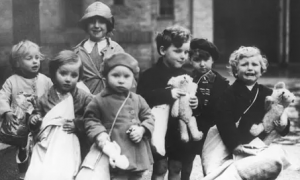 countryside. From 13 to 18 June 1940, around 100,000 children were evacuated within a week. Parents were issued with a list detailing what their children should take with them. These items included a gas mask in its case, a change of underclothes, night clothes, plimsolls (or slippers), spare stockings or socks, toothbrush, comb, towel, soap, face cloth, handkerchiefs and a warm coat. 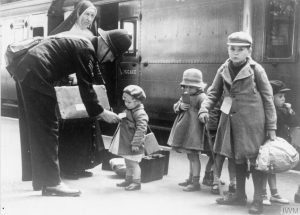 Children  separated from their parents and with identification labels pinned to their clothing, were herded into railway stations accompanied by an army of volunteers.  Hundreds of children arrived in the wrong area with insufficient rations. They were unaware of where they were going, why or when they would be coming back home. They experienced the trauma of separation and isolation at a young age leading to psychological damage for many.  As city dwellers, they often found it difficult to adapt to a life in the countryside with strangers. Some retained happy memories as adults having made lifelong friendships with their foster families, while others suffered brutalising situations with lasting trauma. When parents and children were reunited, often several years later, there were inevitable estrangements to be worked through, sometimes never reconciled.

Age is not a predictor of courage. Many of the thousands of young people drafted  into the armed forces at the age of 18 were volunteers. The average age of air crew pilots in the Battle of Britain was 18.

TIMES HAVE CHANGED. IN TODAYS HEDONISTIC SOCIETY MANY, OBLIVIOUS TO ANYTHING BUT THEIR OWN PLEASURE, CONTINUE TO IGNORE THE RISK TO OTHERS.

Today with the number of confirmed cases of the Covid-19 virus around the world exceeding  400,000,  the World Health Organisation has warned the pandemic is accelerating but many  have ignored the precautionary measures. In Australia social distancing guidelines were ignored with crowds thronging Bondi Beach, resulting 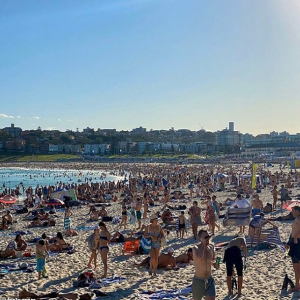 in a government closure of beaches. Some continue  to defy the mandate, stepping over barriers to sunbathe and surf. All cafes and restaurants as well as pubs, clubs, casinos, gyms and places of worship are closed. Weddings are restricted to five people including the couple with funerals restricted to 10 mourners.   From March 25th,  all libraries, museums, galleries, beauty salons, tattoo parlours, shopping centre food courts, auctions, open houses, amusement parks, arcades, indoor and outdoor play centres, swimming pools, and indoor exercise activities will be shut down.

Despite medical advice and government recommendations, thousands of students flocked to beaches in Florida to celebrate the traditional Spring break.

“If I get corona, I get corona. At the end of the day, I’m not going to let it stop me from partying.”

https://www.indy100.com/article/florida-students-spring-break-coronavirus-test-positive-9421501  Some Tampa students who weren’t practising social distancing  during Spring Break, have tested positive for coronavirus on their return home.

IN THE REAL WORLD THERE ARE STILL INSPIRATIONAL HERO’S 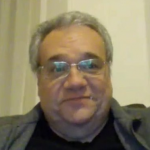 Italian doctor Marcello Natali a father of two, died Wednesday from COVID-19, at the age of 57 after working tirelessly treating patients.  Doctor Natali,  who worked at the Codogno hospital, the epicenter of the  pandemic in Italy, had frequently sounded the alarm about problems regarding Italy’s slow response to the  crisis. Two days before his death he stated he and colleagues were working without gloves due to the shortage.

An Italian priest who gave a respirator to a younger coronavirus patient he did not know, has died of the disease. Father Giuseppe Berardelli, 72, died in hospital in Lovere, Bergamo – one of the worst-hit cities in Italy.

Prime Minister Giuseppe Conte has said, anyone who defies the lockdown order without good reason will now face fines of between 400 euros to 3,000 euros ($430 to $3,227) . 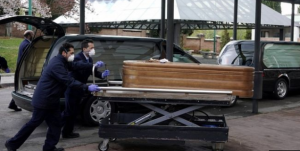 Madrid worsened,the Defence Ministry stated Spanish soldiers helping to fight the coronavirus pandemic have found elderly patients in retirement homes abandoned and in some cases, dead in their beds. The city’s municipal funeral home said it would stop the collection of Covid-19 victims from Tuesday because of a lack of protective equipment. The city is to use a major ice rink, the Palacio de Hielo (Ice Palace), as a temporary mortuary where bodies will be stored until funeral homes can collect them, officials told Spanish media.

WE CAN ONLY HOPE THAT THE VIRUS HAS SUCCEEDED IN  AWAKENING MANY OF US TO THE TRUTH THAT IT IS IN ADVERSITY THAT WE FIND OUR BETTER ANGELS.

Corona Virus – Cause and Consequence