OVERT AND COVERT US INTERVENTION HAS TOPPLED A SERIES OF LEGITIMATE GOVERNMENTS IN THE LATIN AMERICAN REGION SINCE THE 1950s. GUATEMALA, PANAMA, NICARAGUA, HONDURAS AND EL SALVADOR HAVE ALL BEEN INVADED BY THE UNITED STATES  WHICH IRONICALLY IS NOW ‘INVADED’ BY HUNDREDS OF THOUSANDS OF DISPLACED PEOPLE FLEEING THEIR RAVAGED COUNTRIES.

The political manoeuvring by the most powerful nations on the world stage as they align with and against Venezuela should remind us of the self interest and the all too familiar strategy of divide and conquer previously witnessed in the Middle East and currently being  played out in Latin America.  Russia, China and others jostle for position to ensure their stake in that country’s natural mineral wealth and oil, as America attempts to grab the world’s greatest source of oil in its “backyard”,

In the idealised vision of a globalised economy all nations are able to freely negotiate their best interests in equitable markets in a spirit of mutual cooperation and respect. The reality  is that the nature of a dominating force is expansionism, the method being to apply pressure, making demands which can not be met. The aim is acquiescence, capitulation and finally submission to the greater power. Today the US increasingly imposes sanctions, the equivalent of a medieval siege, on nations who refuse to comply with their directives. The strategy is played out in the guise of negotiation through trade wars with an ever present threat of military incursion.

The sovereign nations of Latin America, formerly European colonies particularly of Spain, gained independence  in the 19th century.  They include:  Uruguay 1811, Argentina 1816, Chile 1818, Columbia 1819, Venezuela 1821, El Salvadore 1821, Honduras 1821, Nicaragua 1821, Ecuador 1822,  Bolivia 1825, Mexico 1920 and Panama in 1903.  The United States the United States  unofficially regards parts of Latin America as within its sphere of influence and increasingly used military force  to secure the success of governments sympathetic to it. By 1934, the Dominican Republic, Nicaragua, Cuba and Haiti had all been partially occupied by US forces at some point.  US domination of Latin American countries was eventually opposed by indigenous leaders intent on loosening Washington control and achieving a fairer redistribution of the continent’s natural wealth. The U.S. turned against the regimes it helped install when they began pursuing policies counter to U.S. diplomatic and business interests 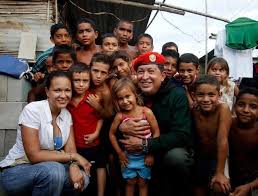 Unprecedented Socialist achievements  brought social justice and pride to millions of people. However land reforms and redistribution of wealth posed a threat to the wealthy and challenged  US expansionist plans for Latin America.  In eight years, Chavez won eight elections and referendums: a world record, he was electorally the most popular politician in the world. Venezuela’s democratic record and human rights legislation,  food programmes, healthcare initiatives, poverty reduction and a national literacy programme went largely unreported in the West due to a campaign of media lies and distortion. 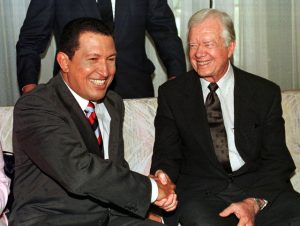 Former President Jimmy Carter, whose Carter Centre is a respected monitor of elections around the world stated: “Of the 92 elections that we’ve monitored…I would say the election process in Venezuela is the best in the world.”  By way of contrast, said Carter, the US election system, with its emphasis on campaign money, “is one of the worst”.

In 200l Chávez became highly critical of the Bush administration and U.S economic foreign policy with regard to Iraq, Haiti, Kosovo and the Free Trade Area of the Americas, and other areas.

When the Venezuelan government announced that the nation’s oil reserves had surpassed that of the previous world leader, Saudi Arabia, American sanctions were immediately increased. A former adviser to the U.S. Departments of State, Energy and Defense described the significant shift as ‘irrelevant’ explaining:   “ So long as there’s no capital flowing into the upstream in Venezuela, especially capital by the companies that have the technology to develop the heavy oil reserves it will remain irrelevant’

The void left by the death of Hugo Chavaz in 2013 could not be filled. His successor Nicolas Meduro has presided over Venezuela as the global slide in the price of oil caused hyper inflation in a society that imports almost all its food. Venezuela’s access to the US-dominated international financial system was blocked. The collapse of oil prices since 2014 and Washington’s “sanctions” against Venezuela, have caused the loss of at least $6 billion in Venezuela’s revenue since 2017, including  $2 billion worth of imported medicines.  In 2018, Maduro was re-elected President despite a tactical boycott by the opposition winning 67.84 per cent of the vote.  In January 2019 President Trump 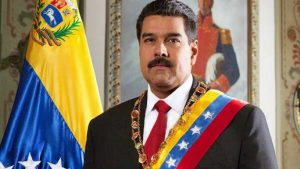 unexpectedly placed further economic oil sanctions on Venezuela aimed at toppling President Nicolás Maduro, exports plunged and banking froze. It was announced that $7 Billion in assets was immediately blocked with a further export loss of  $11 billion anticipated over the coming year. The further sanctions made it virtually impossible for the Venezuela government to take the measures necessary to eliminate hyperinflation or recover from a deep depression. Such measures would include debt restructuring, and creating a new exchange rate system  in which the currency would normally be pegged to the dollar.

Both Chavaz and Meduro have been criticised for their lack of foresight in prioritising social welfare programmes while  neglecting to diversify the economy which could not be sustained when oil prices fell. Crippling sanctions and the Moduro government ‘s failure to manage the economy along with accusations of corruption and human rights abuses have led to the disintegration of Venezuela. In 2018, the UN indicated that between 2015 and 2017, 3.7 million in the Venezuelan population were undernourished. In 2016, maternal mortality rose 65 percent and infant mortality rose 30 percent in just one year.  In the face of a massive exodus of 3.4 million Venezuelans the Maduro government fearful of strings attached to international Aid programmes has denied the humanitarian crisis and is largely to blame for the lack of a coordinated international response.

By recognizing the self appointed Juan Guaido, the National Assembly leader, as the legitimate president of 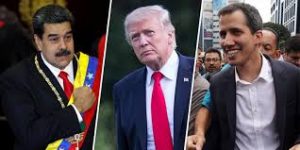 Venezuela, the Trump administration acknowledged a parallel government. This support comes with strings, a broader trade agreement and specific benefits for American oil companies like Chevron and Halliburton, already located in Venezuela.

President Meduros’ request to the Bank of England January 2019 to withdraw $1.2 billion of Venezuelas gold reserves  held by the bank was denied. This follows lobbying  by  U.S. officials, including Secretary of State Michael Pompeo and National Security Adviser John Bolton  to help cut off the regime from its overseas assets.  U.S. officials confirmed this is an attempt to steer Venezuela’s  overseas assets to Guaido to help bolster his chances of effectively taking control of the government. Cynthia Arnson, director of the Latin America program at the Wilson Center commented:  “The Trump administration is looking to absolutely cripple the Venezuelan economy in the hopes that the level of pain will lead to cracks in the armed forces or otherwise result in regime change,”   Should this occur this  will be “the 68th overthrow of a sovereign government by the United States, most of them democracies”.(John Pilger)

AS THE WORLD OBSERVES AMERICA’S OUTRAGE AT THE POSSIBILITY THAT RUSSIA ATTEMPTED TO INFLUENCE THE 2016 US  ELECTION PROCESS, THE HYPOCRISY OF US MEDDLING APPEARS LOST ON THE AMERICAN PEOPLE.