The trial of Jesus is the most documented  ever made. According to our beliefs  it remains as an intriguing historical episode or the major event which shaped world history.  In metaphysical terms it is a perfect demonstration of the Law of Cycles and the way in which energy manifests in accordance with individual and collective behaviour and beliefs, influenced by celestial coordinates which include both astronomical and astrological factors. 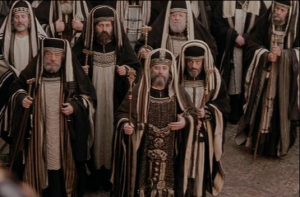 the Sanhedrin, a political religious hierarchy of the day,  jealously guarded its power. Perceiving  him to be a threat to their own authority they conspired to kill him. Caiaphas the High Priest negotiated with Judas Iscariot, the disciple of Jesus who betrayed him.

There were six parts to Jesus’ trial, three in a religious Jewish court charged with blasphemy and three under Roman Civil Law, accused of Treason. The trial continued throughout the night manifesting the negative aspect of the astrological coordinates.

As Palestine was under Roman occupation the Jewish religious Council of the Sanhedrin had no authority to sentence a man to death and were required to bring the most serious charges to the Roman Governor. Blasphemy did not incur the death penalty under Roman law and so an accusation of Treason was brought by the chief Priest.

The religious trials were illegal according to strict Jewish law which stated:

Jewish religious trials: Jesus is first taken to the house of Annas the ex High Priest for preliminary examination on trumped up charges of blasphemy. Jesus is then taken before Caiaphas the high priest, (son in law of Annas) and certain members of the Sanhedrin, for further questioning. He is accused of blasphemy… claiming to be the Messiah. Found Guilty by common consent of those present he is brought before the full Council of the Sanhedrin for a formal trial, found guilty and a sentence of death sought. The Sanhedrin could not authorise capital punishment and so sent him to the Roman Governor Pontius Pilate. By 5am, the religious trials were complete and he had been brought before the Roman legislature by the Sanhedrin, falsely accused of Sedition (Treason)  trying to overthrow the government of Rome and inciting riot, a serious charge .

Roman Civil Trials: Jesus is brought before Pontius Pilate at his official residence, accused of Treason which carries a sentence of death. The Roman Governor finds no fault in him and sends Jesus to Herod Antipas the Governor of Judaea, a puppet king of the Jews who is in Jerusalem to celebrate the Passover festival. Herod is under the authority of Rome, he holds a mock trial in front of a mob; when Jesus refuses to speak to him he is returned to Pilate. In the early hours of the morning Jesus comes before Pilate for the second Roman civil trial. Pilate asks him ‘Who are you, are you a King?  Jesus 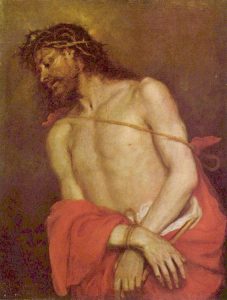 answered:  “My kingdom is not of this world…I  have come into the world to bear witness to the truth. Every one who is of the truth hears my voice.” To which Pilate made his famous response ‘What is Truth?”  Pilate finds no fault with Jesus but bows to political pressure when he is unable to placate the Sanhedrin. Pilate has Jesus flogged with 39 lashes, the soldiers mock and humiliate him, placing a cloak around his shoulders and a reed in his hand as a sceptre of authority with a crown of plaited thorns upon his head. He is then returned to Pontius Pilate for sentencing. 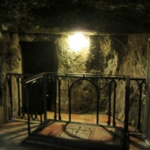 Pilate attempts to bargain with the crowd, offering to release a prisoner for the Feast of Passover; they call for Barrabas to be released and for Jesus to be crucified. Pilate condemns him to death under the Roman law, symbolically washing his hands, saying “I find no fault in this man.” Jesus spends the rest of the night in the Antonia Fortress, the Roman Garrison, awaiting his crucifixion.

It is stated that Jesus  spent 6 hours on the cross  Seeming contradictions are given in the gospels as to the timing of the crucifixion due to two different systems of timekeeping,Jewish and Roman. The biblical account of the crucifixion is that Jesus  was placed on the cross ‘at the third hour’ according to Jewish time, which equates to 9am Roman time.  The death of Jesus occurs ‘at the 9th hour’ Jewish time ie  3pm Roman time.

‘when darkness covered the whole land‘ (Matthew 27:45,Mark 15:33, Luke 23:44–45) all record the three-hours of darkness during Christ’s crucifixion between the hours of 12 noon and 3pm when he took his last breath. Matthew was one of Jesus’ apostles and an eyewitness to the event. Mark was a close companion of Peter, and  also travelled with Paul, Luke, and many of the earliest Christians.  Luke was a Greek physician and historian who carefully investigated the events of Christ’s life. Luke is considered to be one of the most reliable historians of all time, his historical investigation is  based on direct and indirect eyewitness accounts