In esoteric wisdom the long arm of the cross symbolises
the descent of the soul into matter, the two cross bars symbolise East and West. True alchemy refers to the spiritualization of the lower nature of mankind, as practiced 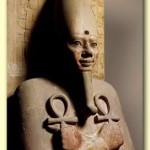 by the ancient esoteric priesthoods of Egypt, predating monotheistic religions of Judaism, Christianity and Islam. The ankh was the symbol of  sacred power invested in the Egyptian priesthoods and transferred through pharaohs, a cross with a looped top  signifying the eternal nature of the soul and its journey.

The devotional rituals which had sustained mankind for thousands of years were later seen as pagan by what would become the mainstream religions of the next Age. The cross in its many forms symbolizes the link between spirit and matter and has been adopted and adapted by sacred traditions through thousands of years. An understanding of the sacred geometry which underpins it helps to dispel  the erroneous belief that the symbol has been hijacked by Christianity. Rather it is a metamorphosis of adapting to changing belief systems from ancient Eygpt, pagan rituals, through Celtic and Roman Christianity to the present day.

The pre Christian equidistant cross and the circle of pagan worship symbolized Unity, 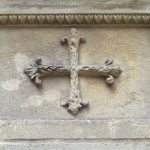 North, South, East and West and the four elements Fire Air Water and Earth. In an attempt by Christianity to discourage pagan ritual, the sacred symbols which celebrated consciousness in all its forms were consigned to supposed superstition and magic of a bygone age, becoming seemingly lost in the mists of time.

Early Christians retained the symbol of the Cross with the circle, signifying the belief in the eternal nature of the soul.

The persecution of the early Christians ended with the reign of the emperor Constantine in the 4th century AD; the Roman cross without the circle was adopted in later centuries when the Roman

church became predominant and the Gnostic Celtic church diminished. In 707AD The Council of Constantinople decreed that a cross with the figure of Jesus nailed to it should be held as a Christian icon. The crucifixion then became the focus emphasising sin and suffering with the Ascension uniquely attributed to Jesus as the only path to salvation.

This appreciation for historical facts in no way diminishes the Christian devotion to the cross and should confirm its relevance. For those with an understanding of metaphysics and sacred geometry who believe Jesus to be a divine Incarnation there was purpose in the manner of his death. The Roman intention to humiliate him as a common criminal through crucifixion in fact left us a potent image of his legacy,the ultimate demonstration of spirit overcoming matter.

Truth is never lost and the spiritual legacy of mankind’s connection to the divine resurfaces wherever it finds purchase. The cross has survived as a sacred symbol in all of its forms. Today ‘New Age’ adherents are free to embrace or reject religious tradition, accepting all denominations or none. An amalgam of esoteric wisdom, healing and devotional practice, its followers are freed from past constraints of indoctrination, allowing those who require it, much needed spiritual respite, rest and rejuvenation. At the appointed time, perhaps yearning for something more than inner reflection, the soul seeks the discipline already found by those who have understood that true freedom lies not in self indulgence but in surrender.