Whatever our opinions about the role and value of a Constitutional Monarchy few UK citizens would argue that Queen Elizabeth ll has not fulfilled her duties to an exceptional degree. As the nation looks forward to the Jubillee celebration of her 70 year reign the reality is that this ushers in a new phase, raising many to question how long the monarchy can survive the continuous and cataclysmic events of recent decades.

The role of the Sovereign is to act as a focus for national identity, unity and pride; to give a 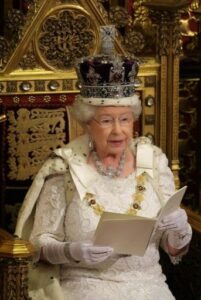 sense of stability and continuity; officially recognising success and excellence; and supporting the ideal of voluntary service. In all these roles the monarch is traditionally supported by members of their immediate family who are meant to uphold the qualities of nobility and service and for which they are amply rewarded by wealth, status and privilege. While perfection is not anticipated, the highest standards are expected of those who claim an unelected right to rule by virtue of birth.

The royal family reflects society and we see our lives mirrored in theirs. The pain of unhappy marriage and divorce, the impact upon mental health and the loneliness and desperation of entrapment and estrangement inherent in enforced roles. A dilemma arises when the public is forced to acknowledge the reality that wealth and position do not always imbue the nobler traits.  Childlike we cling to the need for an archetypal family to provide a reassuring pattern of stability, buying into the virtual reality, Disney world of ‘happy ever after’ rather than accept a flawed Institution.

As the Queen comes to the final part of a long life of service there will be little criticism of her or of others who have shown dedication to service, Princess Anne comes to mind. Others may perhaps be judged more critically.

Prince Charles who lied as he took his marriage vows and continued to lie to the public as he attempted to meet the obligations of the role while fulfilling his personal desires. Diana a loved and remembered princess was humiliated and ultimately usurped by Camilla now Duchess of Cornwall, who will eventually wear both the crown and the title of ‘Queen’, bequeathed to her by no less a person than the current monarch.

Andrew Duke of York, a prince who cavorted with convicted paedophiles before paying £12 m to escape testifying in court on a charge of battery and sexual abuse. Many 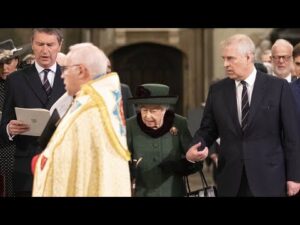 watched the memorial service for Prince Phillip, stunned to see the Queen escorted into Westminster Abbey on the arm of Prince Andrew. Despite concerns raised by Prince Charles and Prince William, the Queen was adamant that this was “her wish and final decision.’  In this she sent a clear message of support. The councillors of the City of York, however, do not share the view of the Queen and on April 28th  in an unprecedented move, councillors unanimously voted to strip Andrew, Duke of York, of the honour of Freedom of the City of York. There were also calls for him to relinquish his title, saying that if he failed, the queen or the government should remove it.

Sarah Duchess of York, has been embroiled in numerous scandals over the years.  In 2010 she was filmed taking £40,000 away in a briefcase related to a 500,000 ‘cash for access to Prince Andrew’ scam. In 2012 the Turkish Ministry for Justice issued an International arrest warrant for Sarah for having trespassed into a Turkish Government institution (an orphanage) and invading the privacy of children, charges carrying a prison sentence of up to 22 years. The trial was adjourned to negotiate an ‘out of court settlement’.

Prince Harry and Meghan Markle, Duke and Duchess of  Sussex: –  Harry was the only senior royal not to attend the Memorial service for his grandfather Prince Phillip on 29th March at Westminster Abbey. Despite her health problems the queen joined a congregation of 1,800, many representing the charities Prince Phillip had supported throughout his long life.  Harry remained in his new home in California on the grounds that he does not feel safe without personal protection – withdrawn after he stepped down as a working royal in 2020.  Harry and Meghan did however attend the Invictus Games held on April 16th in the Netherlands, which he founded and of which he can be justly proud. A Netflix camera crew accompanied them throughout their trip as part of the production of a coming documentary, the first part of their $100m (£76.5m) deal. This will be launched by their recently launched television company Archewell Productions. Only media approved by their Archewell company were allowed to photograph their interaction with athletes at the 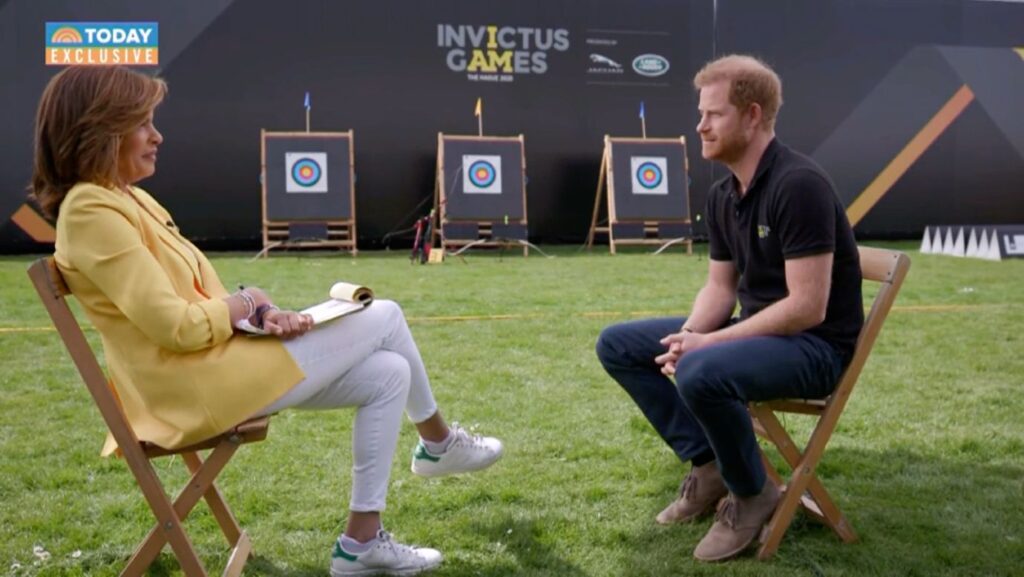 Games. The couple found time for a 30 minute visit to Windsor to see the Queen after staying overnight at Frogmore Cottage, their former home on the Windsor Estate. They received a Special Escort Group (SEG) protection detail when travelling outside, this is a mobile armed protection unit provided to royals and government ministers and now likely be provided to Harry, Meghan and their children on any future visits. The Home Office confirm that Met Police Security can not be approved for private funding so this would be funded by the British tax payer.  During media interviews following the visit, Harry stunned everyone by describing his ‘really special relationship’ with the Queen, saying that she tells him things she feels she cannot tell anyone else…”I’m just making sure that she’s protected and got the right people around her”. Such comments are puzzling and do little to heal the ongoing family estrangement as Harry has not seen his grandmother in person since Prince Philip’s funeral in April 2021 and the Queen has yet to meet their daughter Lillibet, now 10 months old. Harry and his father have rarely spoken over the past two years and it is believed Harry and Meghan did not meet with the Duke and Duchess of Cambridge during their 24 hours in the UK. Despite Harry calling for his family’s privacy to be respected he has negotiated a ‘tell all’ publishing deal alleged to be in excess of $20m with a memoir due out in the year of the Queen’s Jubilee. 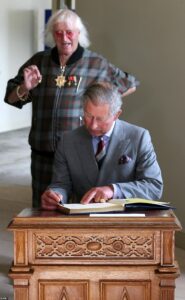 revealed as Britain’s worst child abuser has just been published. Savile responsible for unimaginable crimes against children is also known to have performed sex acts on corpses in hospital morgues. Savile used charity work as a cover for his paedophilia, raising millions to build the new Stoke Mandeville Hospital for spinal injuries which Princess Diane opened in 1983. He was given  24 hour access to all wards, it later emerged that Savile had sexually abused numerous patients at Stoke Mandeville Hospital, many of them paralysed.

In 1989 Prince Charles requested Jimmy Savile’s help in improving the Royal Family’s image after a comment was made by the Duke of York on a visit to Lockerbie, where 270 people died, stating “Of course it only affects the community in a very small way.’ On December 22, 1989 Charles also asked Jimmy Savile to help the Duchess of York with her public relations saying, ‘I can’t help feeling that it would be extremely useful to her if you could. I feel she could do with some of your straightforward common sense.’

Charles also asked Savile for advice on improving speeches and helping him with public visits to charities. On July 4, 1991he wrote from Highgrove House: ‘Dear Jimmy, I can’t tell you how grateful I am for the most useful assistance you have provided for my speech in the Guildhall the other day. ‘I t was really good of you to take the trouble to put together those splendid notes and provide me with considerable food for thought. ‘Whether you think the final result is in any way worthwhile is another matter. With renewed and heartfelt thanks, Charles.’

In 1989 in answer to requests from Prince Charles, Jimmy Savile drew up a five

page PR guide on how the royals should respond to significant incidents, this was sent to Prince Charles at his request and adopted in part.

Savile told Charles: ‘There must be an ‘incident room’ with several independent phone

lines, teletext etc. The Queen should be informed in advance of any proposed action by Family members’. This crisis unit should be run by ‘a special person with considerable experience in such matters’, adding that he (Savile) could speak with confidence on such matters, saying: ‘I get into St James Palace and Buckingham Palace on a regular basis’.

The prince replied to Savile: ‘I attach a copy of my memo on disasters which incorporates your points and which I showed to my Father. He showed it to H.M [the Queen].’

In a time of unprecedented global change, Institutions which fail to adapt will die. Monarchy as the oldest system of government has much to commend it but is dependent upon the will of the people to allow a hereditary system to prevail, for monarchs rule only with the consent of the people they serve. The passing of Queen Elizabeth ll  will be the point of transition…Will we welcome King Charles….King William or the birth of a Republic?