Thousands of people have gathered in Yemen for the funerals of dozens of children, most between the age of 10 and 13, killed in a Saudi-led coalition attack on a bus last week.  Houthi officials have labelled the raid a “crime by America and its allies against the children of Yemen”.  The UN Secretary-General Antonio Guterres has called for an “independent and prompt investigation” into the air strike. The coalition initially said its actions were “legitimate” but later said it would probe “collateral damage”.  Western countries, led by the US and the UK, have supplied the Saudi-led coalition with huge amounts of advanced military equipment, facilitating a military campaign characterised by  accusation of war crimes.

According to the UN Human Rights Council, civilians have repeatedly been the 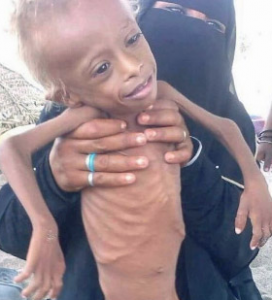 victims of “unrelenting violations of international humanitarian law”. Another Saudi bombing of a funeral using US weapons killed 140 people in October.  Despite the  UN warning that blockades and restrictions could trigger “the largest famine the world has seen for many decades” today, 8 million people are at risk of starvation, a humanitarian disaster.  Severe acute malnutrition is threatening the lives of almost 400,000 children under the age of five.  More than 9,245 people have been killed and 52,800 injured since March 2015.  At least 5,558 of those killed, and 9,065 of those injured up to the end of 2017 were civilians.

The conflict follows the failure of a peaceful transition of power following the Arab Spring uprising, as the recognised government struggled to deal with a variety of problems including attacks by al-Qaeda, corruption, food insecurity and unemployment. Coalition ground troops landed in Aden in August 2015 and helped drive the Houthi rebels and their allies out of much of the south.  Saudi Arabia and eight other mostly Sunni Arab states began an air campaign opposing the rise of a group they believed to be backed militarily by Iran. The  aim being to halt the smuggling of weapons to the rebels by Iran – an accusation Tehran denied. The Saudi led coalition received logistical and intelligence support from the US, UK and France.

With both sides entrenched, three UN-organised efforts to negotiate a peace deal 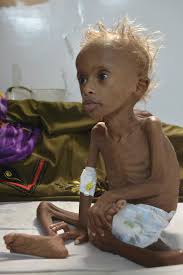 have failed. Yemen is yet another pawn in the increasing regional struggle for power between Saudi Arabia and Iran as America transfers its focus from the Middle East to Asia.  In the resource-rich Arabian Peninsula, Yemen is only a minor player in the global oil business, yet a major escalation of its conflict would have severe repercussions across global oil markets for geo-strategic reasons.  Yemen is located adjacent to the Strait of Hormuz, the world’s most important energy transit and to the Bab-el-Mandab Strait which controls access to the Suez Canal. Disruptions of these key seaborne supply routes to Asia and Europe would result in increased volatility in global oil prices and diminished global supply.  Diplomatic solutions are essential to avoid regional instability and the potential to lead to full-blown armed conflict between the region’s major powers.

HISTORY NOTE:: The  history of colonial power is predicated on access to resources and the strategic position of the country concerned. Yemen is low on commodities but strategically placed. In 1839 The British East India Company captured the port of Aden to provide a coaling station for ships en route to India, Aden was then ruled as part of British India until 1937 when the city of Aden became a Crown colony.  Following the opening of the Suez Canal in 1869, the Aden Settlement gained great strategic and political importance.  When Egypt’s President Nasser led the opposition to colonial rule in the Middle East, the British came under increasing pressure to leave.  In response Britain formed The Federation of Arab Emirates of the South in 1959, incorporating the various states under its protection.

On January 18th 1963 the Colony of Aden was incorporated against the wishes of many of the population and the Federation was renamed The Federation of South Arabia.  An insurgency erupted against the British Crown and South Arabia forces and a state of emergency was declared, North Yemen became a republic in 1962.  In 1964 the British government announced its intention to hand over power to the Federation of South Arabia but stated that the British military would remain.  The ensuing conflict hastened the end of British rule in the territory.  With the temporary closure of the Suez Canal  by Nasser in 1967 the British had no further need to keep hold of their colonies in Yemen and in the face of uncontrollable violence, began to withdraw.  In 1967 the independent Peoples Republic of South Yemen was declared. The two Yemeni states united to form the modern Republic of Yemen in 1990.