The dictionary definition of undue influence: “influence by which a person is induced to act otherwise than by their own free will or without adequate attention to the consequences.” 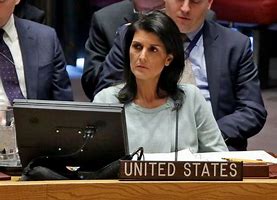 and the US Ambassador’s statement that ‘we will not forget and are taking names’  sent a collective global shudder though the halls of power. Through these actions the long standing but previously obscured  abuse of power becomes transparent. The spectacle of the ‘leader of the free world’  supported by  a mere handful of vulnerable nations, each of which have an inherent dependency on access to US Aid has caused many to question the degree of pressure they faced.

Guatemala with a weaker and more corrupt state and a more impoverished society than that of Mexico has a growing public debt. President Perez Molina is looking to Washington for military aid to support the Guatemalan army to root out corruption. Honduras has the world’s highest murder rate  and high levels of sexual violence despite a population of a little over 9 million. An estimated 1 million Hondurans reside in the United States, 600,000 of whom are believed to be undocumented; consequently, immigration issues are an important item on the bilateral agenda.

Micronesia: (A Federation of small island states, formerly a United Nations Trust Territory under U.S. administration until gaining independence in 1986.) The US will provide $100 million annually over the next 20 years. Guam – 210 sq. mi.; population 186,000 Guam is the largest single island in Micronesia. A territory of the United States and one of its primary military bases in the Pacific. Nauru : 8 sq. mi.; population 9,000. An independent nation; single island. The United States is a major financial contributor to international and regional organizations that assist Nauru, Palau – 177 sq. mi.; population 21,000  an archipelago  of over 300 islands, only 8 of which are inhabited.Palau is the largest recipient of aid per capita from the US, receiving more than $852 million over the last 15 yerars. 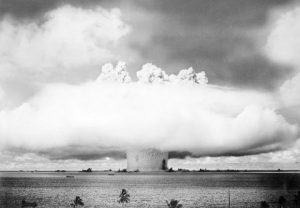 weapons from 1946 to 1958 with 67 weapon tests  conducted, These including the 15-megaton  hydrogen bomb test  on Bikini Atoll which was 1,000 times more powerful than the bomb dropped on Hiroshima, Bikini Atoll became uninhabitable. Prior to nuclear testing, the residents had initially accepted resettlement voluntarily to Rongerik Atoll, believing that they would be able to return home within a short time. Rongerik Atoll could not produce enough food and the islanders starved and were again relocated. In 1970  islanders returned to the Bikini Island, advised it was now safe, until further testing revealed dangerous levels of strontium-90.    Today the Marshall Islands, relies on nominal access to U.S. based health agencies and is, like so many of the islands states of Micronesia, dependent upon US Aid  which represents a large percentage of the islands’ gross domestic product. 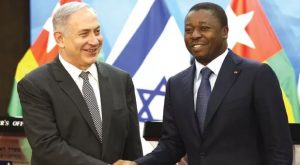 i Prime Minister Benjamin Netanyahu twice in 2017. This  included a conference hosted by the Togo President where Netanyahu stated “Israel is coming back to Africa, and Africa is coming back to Israel,” The President has visited Israel three times since 2012 and Lome the capital, consistently sides with Jerusalem in international organisations,”

While congratulating the moral victory of the 129 nations who chose to ignore the threat, at the UN Council we might also consider the 35 who chose to abstain and why, among them Canada for example, walking a political tightrope with one eye on current NAFTA negotiations.