Aid to countries in need comes in many forms, economic, military, developmental etc. it almost always has strings attached and can intentionally or unintentionally create permanent indebtedness. Aid should never be used as a weapon. Figures can be misleading and confusing, with the  richest nations appearing to give more generously as might be expected. We are frequently reminded that the US is by far the greatest donor of global Aid but when measured against Gross National Product, ie the country’s total wealth, Greece, a country struggling to survive gives proportionately more.  The Chart below shows Overseas Development Assistance in millions for 2015 as measured by the World Economic Forum. The US heads the list of donors.

If we measure per capita ie the amount of Aid divided by the income of the number of people in the donor country, the picture changes.  Europe and Scandinavia consistently giving most.The US, France, Japan and Canada fall off the list. Sweden moves from the mid range to first place and The United Arab Republic moves from the bottom to 2nd place, followed by Norway, Denmark and the Netherlands. Additional countries, Luxembourg, Switzerland, Turkey and Finland appear.

When measuring the percentage of  the Gross National Product committed to Aid a clearer picture emerges: The top ten places are held by  Sweden,Norway, Denmark,Netherlands,Belgium,UK, Ireland, Finland, Spain and Switzerland. The next 11 places by Austria, Germany, France, Canada,Australia, New Zealand, Portugal, Italy, Greece, Japan and finally the United States.

Australia is one of the worlds richest countries, the chart illustrates the amount set aside for Aid from the total budget in comparison to personal spending. 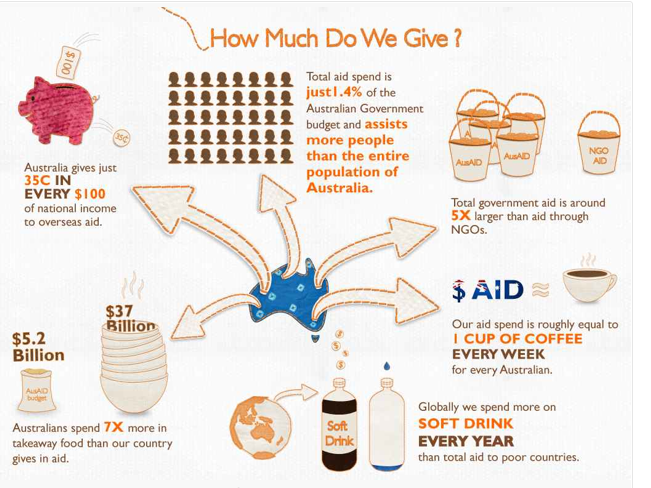 If we give because we are wealthy that is generosity of a kind. True generosity comes from giving unconditionally regardless of how much we have left for ourselves. A reminder of the teaching Jesus gave of ‘the widow’s mite’. Mark 12:41-44 And Jesus sat over against the treasury, and beheld how the people cast money into the treasury: and many that were rich cast in much. And there came a certain poor widow, and she threw in two mites, which make a farthing. And he called unto him his disciples, and saith unto them, Verily I say unto you, That this poor widow hath cast more in, than all they which have cast into the treasury: For all they did cast in of their abundance; but she of her want did cast in all that she had, even all her living.