A glance over the medieval shoulder reveals religious intolerance and a capacity for atrocity equalling anything seen today. When Henry Vlll, the English king, separated from the Church of Rome in 1534 to form the Church of England, Protestantism was forced upon the population and those who dissented were made to pay fines, thrown into prison, tortured  or killed. Elizabeth 1st  succeeded Henry and the Spanish Armada set sail to restore ‘the true religion’ at the popes behest. The Armada failed and centuries of division and religious persecution of Catholics followed.

Catholics were seen as potential traitors and required to deny their allegiance to the pope.The Jesuit priesthood entered the country on behalf of the papacy and laws were tightened.  In 1585, the “Act Against Jesuits, Seminary Priests and other suchlike Disobedient Persons” made it High Treason for a priest to reside anywhere in England or for anyone to hide or assist a priest.Harsh laws meant fines, imprisonment or forfeiture of property could be imposed on those who brought Catholic artefacts into the country, heard mass or sent children abroad to schools or seminaries. The Catholic population became increasingly estranged.  Elizabeth died childless in 1567 and was succeeded by James V1, King of Scotland who became James 1 of England.  The two Protestant kingdoms  became the United Kingdom in 1603, further alienating the Catholic minority.

During this reign religious divisions deepened and Catholics were denied the right to receive rent or make wills; hopes of securing greater religious tolerance faded. Robert Gatesby, a devout Catholic had seen his family relentlessly persecuted with his father imprisoned for harbouring a priest. Co conspirators hatched a plot to kill the king and his ministers by blowing up the seat of government at the Opening of Parliament on November 5th 1605. Guido Fawkes had ten years military experience and was given responsibility for the explosives. The plot was foiled when they were betrayed and ‘Guy’ Fawkes was found guarding the 36 barrels of gunpowder hidden in the cellars,enought to reduce the building to rubble.

King James gave permission for ‘the gentler tortures to be first used unto him, and so by

degrees proceeding to the worst, and so God speed your goode worke’. The top signature is the usual one used by Guy Fawkes, in the one below, after torture, he manages only his first name, Guido in confession. At their trial  eight of the survivors, including Fawkes, were convicted and sentenced to be  ‘hanged, drawn and quartered’.The sentence was read out to each of them,

they were to be “put to death halfway between heaven and earth as unworthy of both”. The genitals would be cut off and burnt before their eyes, and their bowels and heart then removed. Then they would be decapitated, and the dismembered parts of the body displayed so that they might become “prey for the fowls of the air” On 30 January, four of them were dragged through the crowded streets of London to St Paul’s Churchyard, hung then quickly cut down, and castrated, while still fully conscious, disembowelled, and then ‘quartered’ (cut into four parts).The following day, the remaining four, including Guy Fawkes were put to death in the same way opposite the building they had planned to blow up. 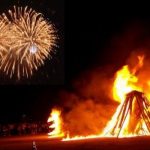 November Act of Parliament’ was passed  making services and sermons commemorating the event an annual feature of English life. Although the origin is lost to many it remains the custom in Britain, on or around 5 November, to light bonfires and let off fireworks. Traditionally, children made “guys’, effigies supposedly of Fawkes—usually made from old clothes stuffed with newspaper, and fitted with a grotesque mask, to be burnt on the 5 November bonfire,  known as Plot Night.

As a result of the Gunpowder Plot new laws were passed preventing Catholics from  practicing law, serving as officers in the army or navy or voting in local or parliamentary elections. It would be 200 years before the laws designed to persecute Catholics in England were finally repealed; in that  time priests were among the many who were imprisoned, tortured 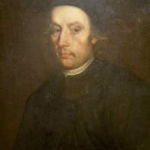 and killed. In the summer of 1628 Fr Edmund Arrowsmith, a Jesuit priest who secretly ministered to Catholics was betrayed to the authorities and convicted of ‘being a Roman Catholic priest in England’. On the judges direction he was found guilty of High Treason and the sentence of being ‘hung, drawn and quartered’ was read out. The judge informed him: “Take the Oath of Allegiance and your life will be granted. You will live if you will conform to the Protestant religion” Edmund refused and suffered the same fate as others before him, following his torture and death ‘his head was then set upon a pole on the pinnacle of the castle and his quarters hanged on four several corners thereof”. The judge enjoying his evening meal  of hindquarters of venison, called for the hindquarters of the priest to be brought down from the turrets of Lancaster Castle and placed on the table for his inspection to be compared ‘with much merriment’  to those of the venison.

Footnote: Catholics were barred from ascending the throne and the monarch was forbidden to marry a Catholic until the law was repealed in 2016.