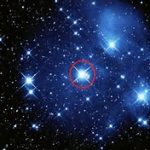 According to esoteric literature Earth is approaching  the Photon Belt orbiting the star cluster Pleides, dates for this event are unknown but considered imminent. The ‘photon belt’ is also referred to as Alcyone’s Rings, Alcyone is the principal sun of the Pleides, 7 suns gravitate within its orbit, the 7th being our own sun which circles Alcyone. The Rings of Alcyone are composed of ‘manasic’ radiation believed to be caused by a cosmic event, the splitting of the electron. ‘Manasic’ is a Sanskrit term referring to Mind and in accordance with the cosmic Law of Correspondence, the human mind is affected by these cosmic forces both individually and collectively. 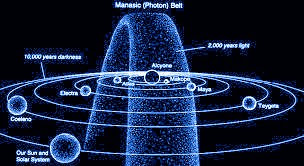 Photons have been described as ‘packets of light’ which generate electro magnetic fields. The potential impact of the ‘photon belt’  upon human consciousness continues to cause debate. Many within the New Age movement believe this shift represents a temporary window with the potential for enlightenment and elevation to a higher plane of existence. For some this will no doubt be true yet spiritual evolution is a path of choice, there is no ‘free pass’. It has been acknowledged historically that ‘divine light’ also purges. We are currently witnessing the negative effects of atomic resonance on human consciousness, one aspect of the global chaos and confusion, mirroring the splitting.The effect  is dependent upon our ability to absorb and integrate the powerful light. Cosmic cycles and orbits are beyond the influence of humanity, we must adapt to the changing environment in order to sustain mental cohesion.

It is part of the human condition to resist change, the mind must investigate, examine, 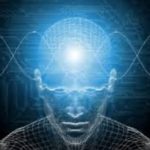 reflect and decide before change can occur. Even then there must be integration before the Will concedes. Ancient texts describe the dual aspects of consciousness as the Higher or Etheric Mind sometimes referred to as the Higher Self and the Lower Intellectual mind which governs cognitive ability and choice. The Higher consciousness corresponds to our origins, divine essence and spirituality. Intuition is the interim link to the Lower or Intellectual Mind which rationalizes our experience and governs waking consciousness.

It has been said that ‘the light which illumines also blinds’ for this is a process of acceptance of something greater than ourselves. Some have made a correlation with ‘the Quickening’  an influx of divine light which Saves, as described in Christian  ‘End Times’ philosophy. Whatever our belief system, we are free to accept or reject unfolding events. Enlightenment is  the process by which light is assimilated by the mind bringing about a profound shift in consciousness. This can be a slow and painful process as we question,  a new reality.This is the eternal human dilemma, the argument between the mind and the soul.

One thought on “Divine Light and Duality”