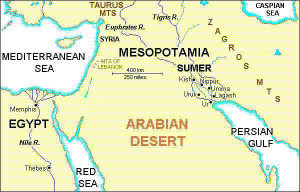 Four thousand years ago in Mesopotamia, the area we today call Iraq, the Akkadian and Sumerian civilizations flourished. Three thousand years ago a network of advanced civilizations included the Old Kingdom of  Egypt (2649–2150 B.C.) early Bronze Age cities in Palestine, and the early Minoan civilization. Eight hundred years later the population abruptly left their homes and fled south, abandoning the cities due to a drought that lasted 300 years.  The latest research shows how subtle shifts in atmospheric circulation could have scorched Mesopotamia and the greater region leading to drought, famine, civil unrest and mass migration.

Archeology from Space: While researching settlements of the Old Kingdom of Egypt Dr Sarah Parcak an anthropologist at the  University of Alabama unexpectedly found that 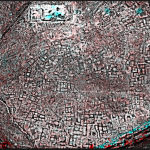 80% of cities had been abandoned at the close of the period.This suggested a cataclysmic event resulting in sudden migration and depopulation. Imagery through Remote Sensing satellite technology showed no further trace of human habitation  for another two hundred years following which pottery shards related to the Middle Kingdom only were found.

Professor Harvey Weiss of Near Eastern archeology at Yale, researched the significance of wind blown sand related to drought, believing that not only the Old Kingdom in Egypt but the other early Bronze Age cities  and the  Minoan civilization were crippled by drought. Dr Peter deMenocal a Paleo – climatologist at Colombia University confirmed that any large-scale drought would have left a mark in nearby ocean floor sediment. The Gulf of Oman lying approximately 700 miles southeast of ancient Mesopotamia, would have caught any windblown dust that swept down from the Tigris and Euphrates valleys. 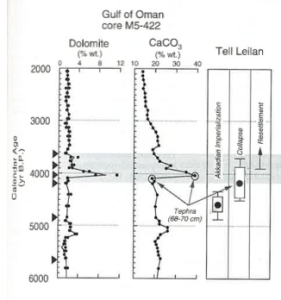 Dr de Menocal verified oceanic core samples. from the Gulf of Oman. Fine sand deposits found in the core samples over a 1 to 200 year period indicated a change in wind currents. ie climate change. Wind blown sand from Arabia at the time of the climatic change corresponded with the period of mass migration at 4200 years. Dolomite (a mineral found in the mountains of Iraq and Turkey and on the Mesopotamian floodplains)   found in the core samples, could only have been transported to the gulf by wind.  The chemistry of the dolomite dust matches that of the dolomite in the Mesopotamian mountains and plains, verifying the mineral’s source. At exactly 4,200 calendar years, the graph shows a big spike of dolomite, a fivefold increase. This in turn corresponds with the onset of  the collapse of  empires.

Dr Fekin Hassan Institute of Archeology University College, London conducting research on tomb records of Peppi ll The last Pharaoh of the Pyramid Age, the Old Kingdom. Tomb decorations illustrate abundant crops and produce, a flourishing economy and stable society of artistic refinement in the highest civilization then known. At the end of a reign of 94 years Pharaoh Peppi left a stable kingdom with no sign of unrest. Inexplicably the area then suddenly became depopulated with no further pyramids built for a two hundred year period, suggesting a decline of empire. Tomb Inscriptions from 2,184BC record a period of civil unrest, looting, killing and collapse of the empire: ‘The sky was clouded, the people were like locusts throughout the land. The whole of Egypt was dying of hunger to such degree that everyone had come to eating their children’  A papyrus document centuries later confirms the social upheaval: “Lower Egypt weeps, the children of princes are dashed against walls. The river is blood yet still men drink of it. How was it that everyman kills his brother”

Historians have long puzzled over the sudden demise of established civilizations; in the past few years, drought and flooding have been cited in the demise of several including the Maya of Central America, the Anasazi Indians of the American Southwest, the Moche of Peru and the Tiwanaku of Bolivia. Climate change research now also indicates why many of the major cities of the Indus Civilisation, of present-day Pakistan and India were abandoned due to a sudden weakening of the summer monsoon affecting northwest India 4,100 years ago. University of Cambridge scientists Professor David Hodell and Dr Cameron Petrie have demonstrated that the resulting drought led to the decline of cities. “It is essential to understand the link between human settlement, water resources and landscape in antiquity, and this research is an important step in that direction,” explained Dr Petrie. “We hope that this will hold lessons for us as we seek to find means of dealing with climate change in our own and future generations.”