Surprisingly,  there are more similarities than differences  between Christianity and Islam. 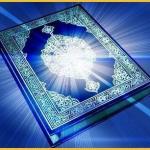 The definition of a Muslim is ‘One who surrenders to the will of God’. Mohammed is acknowledged by the faithful as the final messenger sent from God; chosen to receive verbal communication from Archangel Gabriel, to guide mankind to the last days. This became the Quran.

Jesus is revered by Muslims as a prophet and and referred to under various titles, the most common being al-Masīḥ  (“the Messiah”). Muslims believe that Jesus will return to earth near The Day of Judgement to restore justice and to defeat al-Masih ad-Dajjal  (“the false messiah”. (also known as the Anti Christ). Jesus is named in the Quran more often than the patriarchs, Moses (136 times) or Abraham (69 times). His Islamic name is Isa ‘the word of truth’ and he is referred to as “Ibn Maryam” (son of Mary).  Muslims believe Jesus was  sent by God as a final prophet to guide the children of Israel; he is unique in being the only prophet in Islam who neither married nor had any children

In Christianity God is expressed through

The  Holy Trinity, Father ,Son and Holy Spirit, with Jesus, The Son.  Islamic text forbids the association of partners with God who is singular, or “one” – the pinnacle of sacred power. The Quran says that Jesus himself never claimed to be the Son of God.

Mary: The nineteenth chapter of the Quran (Maryam) is named after Mary and refers to her life.The Quran accords with biblical text regarding the lineage of Mary as “the daughter of  Imran” (the equivalent of Joachim in Christian tradition) and “sister of Aaron”. In the Quran, Hannah the mother of Mary, prayed for a child and eventually conceived; in gratitude she presented her daughter to serve in the temple.

The Immaculate Conception:  The Quran states that the only children born without the ‘touch of Satan’ were Mary and Jesus.

The Annunciation: The Virgin Birth of Jesus announced to Mary by the Archangel Gabriel is a dogma which is disputed by many Christians but univocally recognized in Islam. 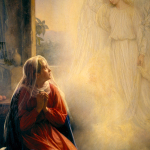 The Quran states that God breathed “His Spirit” into Mary while she was chaste. “Behold!” the angel said: “O Mary! Allah hath chosen thee and purified thee – chosen thee above the women of all nations”. Mary asks the Angel Jibril (Gabriel) how she can conceive, when no man has touched her. As in biblical text, Gabriel’s reply assures Mary that for God all things are possible and that the virgin birth will be a sign for mankind.

Miracles: Jesus preached that his followers should adopt the “straight path” as commanded by God and was given the ability to perform miracles including healing the sick, curing blindness, raising the dead and casting out demons. No other prophet in Islam has ever been credited with equal power. ‘Isa, through God’s power and will, cures the blind and the leper, raises the dead to life and knows what you eat and what you store in your houses.’

Death, Resurrection and Ascension: Islam teaches that Jesus survived the cross and continued his mission, at the end of his life ‘God raised him unto Himself’. The Resurrection is viewed as the end of the world when all humanity will be raised and judged – Judgement Day. Christianity and Islam share a belief in Heaven and Hell.