WHAT DOES IT MEAN TO BE ROYAL?  THE DICTIONARY DEFINITION IS ‘RELATED TO A KING OR QUEEN’ DENOTING NOBILITY AND IMPLYING SERVICE. 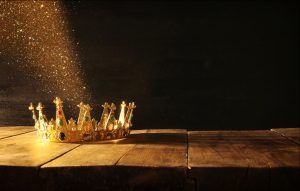 The most recent episodes of scandal and controversy resulting in the demotion of not one but two royal princes of the British monarchy provides an opportunity for reflection to consider the privilege and inequality inherent within an outmoded class system.

Under increasing public scrutiny moral and ethical standards are repeatedly revealed as flawed. Domestic scandals have long dogged the royal family but now US  lawyers representing victims of international sex trafficking by Jeffrey Epstein have  turned their attention to those who may have enabled his crimes. Prince Andrew has been notified of possible subpoena action due to his  ‘zero response’ to their requests for his cooperation in assisting with their enquiries.

INHERITANCE TAX:  The Queen is not liable for Capital Gains Tax (28% on profit of sale)  or Inheritance Tax (40% of an estate over the £325,000 threshold)  but from 1993 has paid a voluntary payment in lieu. However an obscure “sovereign to sovereign” clause under a 1993 deal with the Conservative government, exempts taxation where a monarch inherits from another monarch. Capital Gains Tax rate for lesser mortals is 18%. 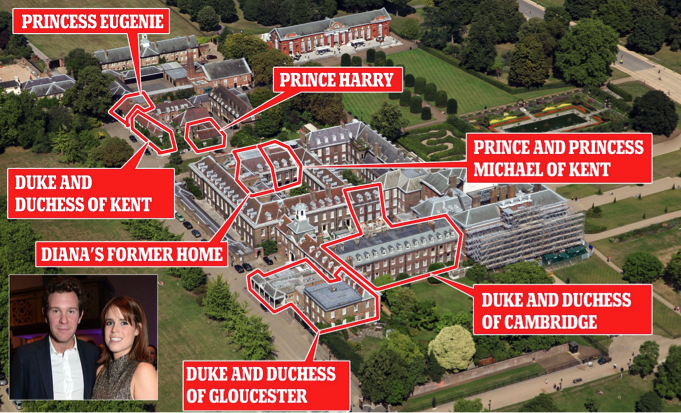 KENSINGTON PALACE is traditionally the home of senior royals, many royal  residents formerly lived rent free or paid a nominal rental for the prestigious,  prime location, and gated security.  The property continues to provide  expansive accommodation even for minor members of the royal family as they relocate within its walls. Unfortunately each relocation costs the tax payer to ‘make the units habitable’. Prince Harry lived in Nottingham Cottage prior to his marriage to Meghan Markell and their move to Frogmore Cottage on the Windsor  Estate. Princess Eugenie relocated from St James Palace to Ivy Cottage following her marriage. William and Kate live in Flat 1,  formerly the home of princess Margaret and currently under an extensive £4 million pound conversion to extend the property which will  incorporate the  former residence of The Duke and Duchess of Gloucester who are downsizing.

PRINCE MICHAEL AND HIS WIFE PRINCESS MICHAEL OF KENT: In 2002 following scrutiny by the House of Commons Public Accounts committee, the Queen was asked to put the apartments on a more commercial footing or evict certain tenants.The  rent revue revealed that Prince Michael of Kent  ( a cousin of the Queen) and his wife had lived rent 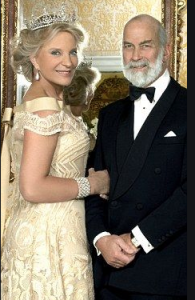 free in the grace and favour apartment in Kensington Palace following their marriage in 1978, paying only an ‘amenities charge’ of £69 per week When the offer of alternative accommodation from the queen was refused, Buckingham Palace announced that “The Queen is paying the rent for Prince and Princess Michael of Kent’s apartment at a commercial rate of £120,000 annually, from her own private funds”. In 2006 the couple sold their Gloucestershire mansion,for £5.75 million but did not begin paying the full market rent of £120,000 for their Kensington Palace apartment until 2010, eight years later. The prince  supports a range of charities and manages his own consultancy business; the princess’s own website describes her as a “writer, historian, lecturer, interior designer and art consultant” with an estimated fortune of $£8 million.

ANOMALY OF RELIGOUS RIGHTS AND RIGHTS OF SUCCESSION

PRINCE EDWARD DUKE OF KENT: A  cousin of Queen Elizabeth was 7th in line of succession to the throne at the time of his birth, raising an interesting predicament later when his wife Catherine Worsley who rejected a royal lifestyle for many years, converted to Catholicism. The Act of Settlement of 1701 bars Catholics from the throne and when her son also later converted he lost his right of accession. The Succession to the Crown Act (2013)  amendment ended primogenitor, the system by which males inherited the throne but still bars Catholic royals from the throne.  The couple separated for many years but now continue to reside at  Wren House in the grounds of Kensington Palace with an office base at  at St. James’s Palace.

Prince Charles stated desire for a ‘trimmed down monarchy’ will be welcomed  though for some it does not go far enough. Buckingham Palace, will cost an estimated  £369 million as part of a ten-year project renovation programme, Prince Charles has stated that he will not reside there when he becomes king and suggests it might become a museum… perhaps a potent of the future role of the monarchy.