How do we differentiate between cultural tradition and what is effectively torture?

MORE THAN 200 MILLION GIRLS AND WOMEN ALIVE TODAY HAVE BEEN CUT (FEMALE CIRCUMCISION) AND THE PRACTICE CONTINUES THROUGHOUT THE WORLD DESPITE LEGISLATION AND THREAT OF IMPRISONMENT.

FGM (female genital mutilation) falls within the definition of abuse under international law i.e. physical,  psychological, emotional, or sexual where the person could not have consented or were pressurised into consenting. It aims to ensure premarital virginity and marital fidelity by reducing the woman’s libido in an effort to resist extramarital sexual acts. Traditionally girls who are cut increase their marriage prospects. FGM is the ritual cutting or removal of some or all of the external female genitalia. Cutting is considered a  cultural ‘rite of passage’ to initiate girls into womanhood and is accompanied by communal celebration with gifts bestowed. The procedure is done without anaesthetic, often performed by traditional circumcisers or ‘cutters’ who do not have any medical training. In some countries it may be done by a medical professional in the belief that the procedure is then safer.

FGM  is found in Africa, Asia and the Middle East, and within communities from countries 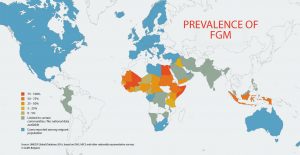 in which FGM is common. Girls are at risk of being returned to their home countries for FGM especially during holiday periods to allow for healing to take place.  It is  is mostly carried out on young girls between infancy and age 15, commonly before puberty begins. It is estimated that between 50 and 60% remain unaware that they have been subjected to the procedure if carried out in infancy or early childhood due to trauma memory being suppressed.

Culture is self enforcing.  Where males demand wives who have been cuttradition demands that female members of the girls family, grandmothers, mothers, aunts take an active part in the initiation. The girl is not informed in advance and usually has no understanding of what is occurring or why, the practice is often carried out against her will.  She is forcibly restrained before being stripped of her clothing and held down. One person sits on her chest while others hold her arms and legs which are spread to enable the procedure to be carried out, knives, scissors, scalpels, pieces of glass or razor blades may be used.  Bleeding is often copious and is stemmed by sealing the tissues using heat prior to any stitching.

There are different types of FGM

FGM results in excruciating pain and leads to bleeding which can be fatal. Chronic conditions include abscesses, repeated infections, urinary 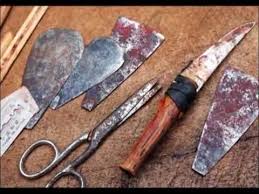 incontinence, pain on intercourse, permanent loss of pleasurable sensation and reduced sexual desire. Women who have undergone FGM frequently experience infertility and problems associated with pregnancy and childbirth are common.  Mental health is compromised, gynaecological examination can cause flashbacks to occur as a result of trauma  memories surfacing even when the woman has no knowledge of the cutting. Those who have experienced type 3 FGM require surgical intervention to remove scar tissue to ensure safe delivery of the baby.

Those who place cultural identity above the human rights of the child often accuse advocates of racial or religious prejudice; it is therefore refreshing to note that the practice is not required by any religion neither is it mentioned in the Torah, the Bible or the Quran. The practice is not restricted by race, the only prejudice is one of gender discrimination. It is a sad commentary on humanity that conduct and behaviour is defined by legislation rather than choice for cultural change is a slow and painful process which usually requires a helping hand.

HISTORY SHOWS US THAT CHANGE CAN COME QUICKLY

Over 1,000 years ago foot binding became fashionable in ancient China yet it was eradicated in one generation when parents agreed not to bind their daughter’s feet or to allow their sons to marry a woman whose feet had been bound. The foot binding ritual was  bonded to expectation in the marriage market.  In a time when starvation was commonplace, wealthy men demonstrated their status by their ability to keep wives and concubines decorative and sexual. Tiny feet were considered highly erotic and foot binding symbolised the restriction of female bodies reducing women to a subservient shuffle. The practice later spread to all classes restricting millions of girls to the home where they worked as economic labourers. 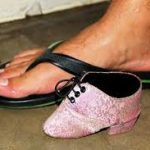 Feet were bound from the ages of four to nine, an extremely painful process in which the toes were bent backwards and pressed down into the tiny shoes, the bones in the toes 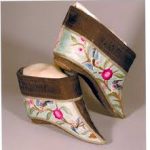 would eventually break causing the foot to arch, feet were reduced to 10cm stumps. Foot binding was banned in 1911 when Christian missionaries campaigned against it but mothers and grandmothers continued to bind their daughters feet until new legislation eradicated the tradition.

Leyla Hussein is a Somali-British activist, writer, and licensed psychotherapist. In 2013, she founded The Dahlia Project, the UK’s first therapy service for female genital mutilation (FGM) survivors — and a year later appeared in “The Cruel Cut”, a BAFTA-nominated Channel 4 documentary on FGM in the UK.