The planned Alaskan Pebble Mining Project is greater in scale than anything ever seen.  The site  is estimated to be the  2nd richest mineral reserve in the world and the largest single bodied copper ore formation ever found. Northern Dynasty Minerals began exploring mineral deposits discovered  in 2007 and the UK based ‘Anglo American’ joined them to form the Pebble Partnership. In 2010 geologists 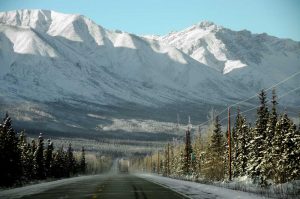 claimed that the region contained around 80.6 billion pounds of copper, 107.4 million ounces of gold, and 5.6 billion pounds of molybdenum (Molybdenum is a metal used to make  missile and aircraft parts and used in the nuclear power industry. It is also used as a catalyst in the refining of petroleum.)

Northern Dynasty estimate that the site contained over $300 billion worth of recoverable minerals (2010 prices). The mining development creates formidable challenges. An open pit mine, which at its peak would be nearly 2 miles across and around 4,000 feet deep with an additional 2 dams, both of which would be the largest of their kind. The plan has been vehemently opposed by environmentalists. Solid waste estimated at around 10 billion tons must be stored while toxic muddy sediment called tailings, containing everything from cobalt, to nickel, antimony, arsenic, lead, selenium, mercury, cadmium, and copper remnants must be contained behind massive dams for the rest of time.

Copper mining produces a vast amount of sulphuric acid, which if drained into the environment would destroy wildlife, decimating nearby fresh water streams. The mine would need to be constantly pumping out ground water, to avoid the mine flooding. . (Pebble claims that they will pump the water back into the environment after it has been cleaned.)  The EPA (U.S. Environmental Protection Agency) has previously said a mine could 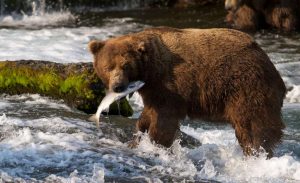 destroy up to 94 miles of salmon-supporting streams and thousands of acres of wetlands, ponds and lakes. Polluted water from the mine site could enter streams, causing widespread damage in a region that produces nearly 50 percent of the world’s wild sockeye salmon and which is also home to bears, moose and caribou.

Many of the locals are members of various Native American tribes, reviving memories of  the 1898 Klondike rush for gold which brought profound social, economic and political change to the First Nation.  For thousands of years the 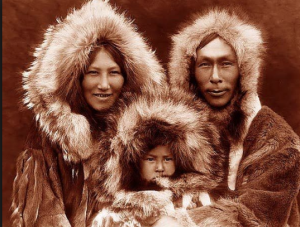 Yupik have depended on salmon, along with pike, whitefish, beavers, caribou, moose, berries, and plants such as wild rhubarb.  Their sustainable lifestyle based upon community and sharing contrasts dramatically with the competitive world of market commodities. “We share with the whole village…. we give away our first big game. It always comes back.”  Some 7,500 people, rely on the wildlife for their livelihood, the elders warn that if creeks, rivers and lakes where salmon spawn are decimated  – “Once that’s gone “you can’t get it back.”.

The Profit motive continues to reign supreme in the battle between industrialism and conservation, even as the dire predictions made by environmental scientists are now being fulfilled. Copper, gold, and molybdenum are all vital minerals used in a device hungry society which feeds on modern technology. Yet there is ample existing production of all three throughout the world. In 2015 alone, the world produced an estimated 19,100,000 tons of copper, 2,500-3,000 tons of gold and 250,000 tons of molybdenum. The annual value of the salmon fishery is upwards of  $1.5 billion, this  sustainable industry, supports local employment and the global economy. Compare this with Pebbles estimated $300 billion worth of recoverable minerals (2010 prices) which once mined are gone forever, leaving a legacy of a decimated landscape with global consequences.

In 2014 President Obama halted the mining project, the Trump administration has cancelled or reversed many of the former environmental agreements, enabling the Pebble mining company to submit a new application. A surprise decision to leave the 2014 restrictions in place while it “receives more information on the potential mine’s impact on the region’s world-class fisheries and natural resources” caused initial jubilation by conservationists, this was however premature. The Environmental Protection Agency’s new EPA

administrator, Scott Pruitt met withTom Collier CEO of Pebble to strike a deal to allow developers more time to submit a permit application to the Army Corps of Engineers. It will begin to roll back restrictions on large-scale mining in  Alaska. “Collier said the company spent nearly $750 million preparing to get the proper permits — spending that he said was without merit until Trump’s election in November.

Alaska sits on what is known as the Pacific Ring of Fire, a collection of global fault lines; 90% of all of the world’s earthquakes occur on the Ring of Fire with 22 of the 25 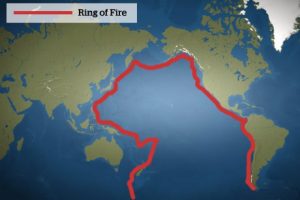 largest volcanic eruptions from the past 11,000 years in that region. The  fault lines spanning New Zealand, Malaysia, Indonesia, parts of of Russia and Alaska, cover all of North America and South America, ending in Southern Chile. At least 9 earthquakes in Alaska  have gone above the 7.5 magnitude limits on the proposed Pebble Mine tailings dams, 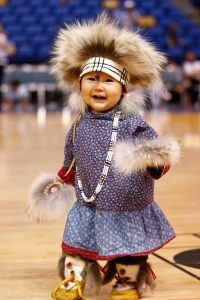 this includes the notorious 1964 earthquake with a magnitude of 9.2.

As we observe the repeated  corporate decisions placing Profit and Power before People and Nature it is perhaps the Earth itself which will teach us humility and to respect the manifest gifts of nature if we refuse to learn. We cannot turn the clock back yet if we are to ensure a future for our children we can perhaps reset it by adopting principles which served indigenous peoples for so long.