The number of children born to priests is unknown although one support group, Coping International, founded by the son of a priest, has 50,000 users in 175 countries. Some children are the result of consensual relationships, but others are the result of rape or abuse.   It is perhaps inevitable that Catholic priests, forced to suppress their sexuality would have been breaking their vows of celibacy and fathering children for centuries, through both abusive and loving relationships. The Vatican has kept the ‘open secret’ never addressing the question of responsibility for the emotional and financial support of these children and their mothers.In 2019 the Vatican has acknowledged for the first time the existence of secret guidelines for priests who break their vows of celibacy and father children.

Vincent Doyle a psychotherapist based in Galway, learned at the age of 28 that his godfather, a Catholic priest in central Ireland — was, in fact, his biological father. His parents had met at a wedding in the early 80s when Fr Doyle was home in Ireland from the US diocese of Camden, New Jersey, when his mother was already 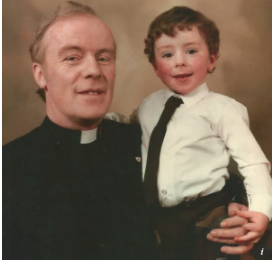 married with three children. He arranged for a transfer back to Ireland where he served as a priest until his death in 1995 by which time Vincent was 12 years old. Throughout his childhood the priest maintained a close bond with his son (pictured) ringing him each morning before school; they spent Friday evenings together watching television before Vincent went to sleep in the bedroom provided for him. The tone of poems written by the late priest and his mother’s tearful response to Vincents query – ‘He was my father wasn’t he?’ confirmed Doyles suspicions. Vincent Doyle adopted his father’s surname and states ‘he did everything he could for me in the circumstances, they loved each other and I loved him as a son…. ‘ ‘The big problem with children of priests is that they technically don’t exist, until someone says they actually exist, it is a psychological battle that the children face…. When secrecy has been imposed on a child for their whole life, it is a form of abuse that must be addressed.’

After becoming aware of others in his position, Vincent Doyle, a committed Catholic, went to see papal nuncio Archbishop Charles Browne who arranged for him to have a front seat at a general audience in Rome with Pope Francis, on the anniversary of his father’s death.  He passed a letter in Spanish to the pope, similar to one already sent to Irish bishops concerning acknowledgement of children fathered by priests. On his return to Ireland he found Irish bishops supportive, noting the lack of guidance in Cannon Law, Archbishop Martin of Dublin, an outspoken supporter of clergy abuse survivors, took up his cause, along with other bishops and agreed to fund a website.   www.copinginternational.com 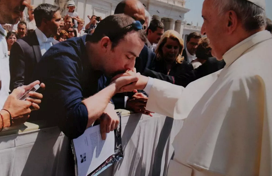 children of priests and travelled to Rome to join the thousands of Catholic faithful filling St. Peter’s Square, in the hope of speaking with Pope Francis. When the pope approached, he kissed the papal ring (image left) and introduced himself in Spanish, the native language of the pope, saying ‘I am the son of a Catholic priest in Ireland,’ He handed the pope a letter, Francis placed an arm around his shoulder as he read the first paragraph ‘with a deeply sincere look on his face,’ Doyle recalled. ‘Then he held the letter to his heart and said, ‘Si, si, I will read.’ The last thing I said to him was, ‘You have until Monday!’  Three years later, Doyle has yet to hear back from the Vatican or to receive a response to his letters, phone calls, and emails to American prelates.

The newly acknowledged Vatican document requests that a cleric who has fathered a child leaves the priesthood to ‘assume his responsibilities as a parent by devoting himself exclusively to the child.’ However, Monsignor Andrea Ripa, undersecretary in the Congregation for the Clergy at the Vatican, told The New York Times that the guidelines were more of a formality than an order. The Vatican  declined to make its advice public, saying it was an internal matter. The report comes about two weeks after Pope Francis acknowledged for the first time the rape and sexual abuse of nuns by priests and bishops inside the Catholic Church.

In direct response to Vincent Doyle’s campaigning, Irish bishops instituted a global model. They say: ‘The birth of a child brings into being a unique person with a mother and a father. The two parents have a fundamental right to make their own decisions regarding their care of the new born child’ ….. ‘A child’s wellbeing must be the first consideration of a priest father, and that he must “face up” to his personal, legal, moral, and financial responsibilities directed by his superiors.’ The principles were not announced or published.

BLAMED, SHAMED AND SILENCED – SEXUAL ABUSE OF NUNS BY PRIESTS