Hearing impairment is by its very nature not only disabling but isolating as communication is compromised. Prior to advances in technology many profoundly deaf children were also mute, unable to speak, making them among the most vulnerable in society. The idea that anyone might take advantage of this disability is repugnant however historical child abuse in its many forms has been perpetrated by a minority of staff in residential care settings. This  is increasingly being revealed as an international problem, a sad commentary on society as a whole.

Saint Josephs School for the Deaf opened in Dublin Ireland in 1845, run by the Catholic Christian Brothers, a teaching Order known for its strict and sometimes harsh discipline. The school gained a reputation for a high standard of education and vocational skills training boys as cobblers and tailors as preparation for financial independence. 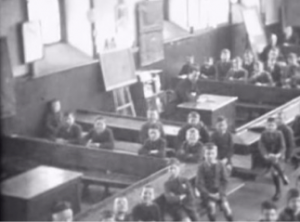 Language is the foundation of culture, historically used, knowingly or unknowingly as  a powerful tool of abuse.  ISL ( Irish Sign Language)  is believed to have developed at St. Josephs enhancing a rich cultural heritage. As advances in sign language progressed, the American system of sign language was introduced but resisted by the Christian Brothers. Boys continued to be taught ISL while girls with hearing impairment at the neighbouring St Mary’s school were taught American Sign Language. The two systems were entirely different making communication between boys and girls attending the two schools almost impossible. This deliberate segregation by language, minimised interaction and the possibility of intermarriage between deaf couples as at that time it was widely believed that deafness was inherited. The significance of gender equality here should not be overlooked. 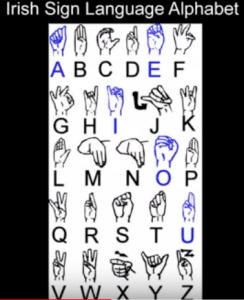 and mimicking the mouth shapes and breathing patterns of speech instead of  sign language. In 1957 Oralism replaced signing which was banned almost overnight, extreme punishment was applied to children using signing. Prior to this the boys were taught as one integrated group, under this new system they  were separated according to their level of hearing  impairment. Three groups were formed, profoundly deaf, partially  deaf and children who had no speech ie deaf and mute. This segregation applied to all aspects of the school, meals, socialising and sports, a kind of apartheid which resulted in animosity and division. Boys who  could only sign were taught in a separate building and not allowed to mix with former classmates. This further segregation isolated boys who were all profoundly deaf and mute, unintentionally providing opportunities for pedophile priests and lay staff to gain access to the most vulnerable…those unable to speak.

A later Commission of Enquiry into abuse at St Josephs confirmed physical and sexual abuse had been perpetrated by a number of Christian Brothers and lay staff. The following testimonies provide a glimpse of prolonged and torturous sexual abuse.

“I would scream at nights, but everyone was deaf, so no one would hear me….  ‘It could be three or four times a week, then the next week nothing would happen, the following week it would start all over again, I’d say it went on for nearly seven years. He used to come to my bed at 1 or 2 in the morning, he always carried a torch and would 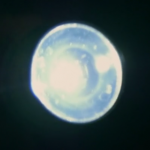 shine it on me when I was asleep. He began by rubbing his hands over my body. One night, what he did to me…. I screamed… he had the torch in his right hand and he hit me with the torch. The next day I had a black eye, a few boys asked me how I got it… I had to say that I slipped in the toilet. I was always thinking to myself – What’s he going to do to me this week, maybe he’ll do the same as last week..maybe he’ll do something different..he might hurt me more’.  “I sleep with the lamp on because I’m afraid of the dark”

“Saint Josephs to me was like Auschwitz… like a prison camp…it was not a house of God..they were evil people… 5 years of abuse just because I’m deaf”:  ‘I’ll never forget the first time it happened.. A Christian Brother came up to me in the Play Hall, he said he had a letter from my mother..he told me to meet me in his bedroom upstairs. I went to his bedroom and he put me sitting on his knee. I remember him opening the letter and there was an old pink ten shilling note in it, he said I could keep it for sweets. Then he started reading the letter, I was wearing short trousers at the time and he put his hand up my trouser leg and started molesting me…Some of the brothers were good… there were an awful lot of them bad. I remember one night a Brother came into my dormitory drunk..put his hand under my blankets and molested me…there was a bad smell of drink often… I didn’t tell anyone because I was afraid.’  While I was still at school I tried to kill myself.. . It ruined my life… I left school and went home and I became an alcoholic….I tried to kill myself a second time but my brother caught me…it still plays upon my mind you see”