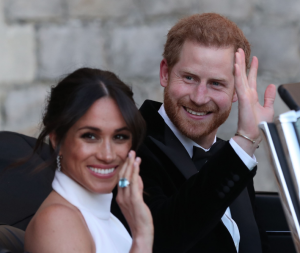 relocate to North America. Whatever the motives, questions arise as to the  way in which Harry and Meghan have conducted themselves, widely viewed as a lack of respect for the Queen and the monarchy itself. There is true affection for Harry and  sincere acknowledgement of the trauma caused by his mothers death at such an early age… who can forget him walking with his brother behind her coffin. Whatever the true cause, the total breakdown of the relationship between Harry and William is viewed as collateral damage arising from the marriage of Harry and Meghan.

Admiration for Harry in his work for veterans and his courage in speaking up about mental health issues  had led us to believe that here was a true champion eager to use his position to support those most in need. All the more disappointing to discover that he and Meghan have been working diligently behind the scenes preparing marketing strategies to ensure a profitable platform is in place for their exit from royal duties. Their  new website announces the intention to market their prestigious rank under the brand name ‘Sussex Royal’ without the queens prior approval.  The sudden announcement conceals the fact that a trademark application for a range of goods and activities  with UK intellectual property authorities was made on their behalf last June with ownership transferred to the couple in December. The application made six months ago covers Australia, Canada, the EU and US branding over 100 items including pencils, bookmarks and socks.  Six classes were listed in the applications, covering printed matter such as magazines and greeting cards, clothing ranging from footwear to pyjamas, charitable fundraising and management, as well as education and social care services, including the organising and conducting of emotional support. This tawdry deal unquestionably demeans the monarchy. In addition Meghan  had also signed a voiceover deal with Disney, potentially the first of many such deals, in return for a donation to an elephant charity. The Duchess of Sussex is said to have completed the recording before they left for Canada on a six-week break with Prince Harry before the shock announcement.

While many of us will feel sympathy for them in their attempts to operate within the restrictions of an archaic  monarchical system, they are incurring the displeasure of the people they are meant to serve. There would perhaps be  more respect for the decision had they shown a readiness to give up their titles and privileges as they opt out. The statement that they wish to ‘work towards be financial independence’ rings hollow given the fat that Harry is a multi millionaire and Meghan had already amassed a considerable fortune prior to their meeting. Similarly complaints of personal hardship witnessed against a backdrop of African poverty  during their recent tour was seen by many as self indulgent whinging.

Surprisingly, given that the couple wish to ‘become financially independent’ they do not expect to relinquish their royal titles or the ‘grace and favour’ home which was

a gift from the Queen as they began their journey together as royal ambassadors. This couple have enjoyed the trappings of rank and privilege at the expense of the general public. Their wedding cost an estimated £32 million and their  home was renovated  ‘to bring it to a habitable state’ to the tune of 2.3 million pounds  at taxpayers expense Their new website states that they ‘wish to retain this property as a UK base’ following their exit from the royal family with no mention of refunding taxpayers expense.

As Duke and Duchess of Sussex, security is provided by a team of six armed police officers to accompany them at all times, costs are paid by the Metropolitan Police  and currently stand at £600,000 per annum. During their seven week ‘time out’

in Canada over Christmas, additional officers had to be flown out, making a team of ten to maintain the rota.  Dai Davies former Chief Superintendant who led the Royal Protection Unit has said of their plans, ‘it is going to cost millions to protect Harry and Meghan in the long term. If you look at the cost in terms of police officers – their salary, overtime, overseas allowance, pensions, accommodation, flights etc – the total resource budget is going to be in excess of £100,000 per officer.  To put this in context, taxpayer funded protection for  Prince Andrew’s daughters, princess Beatrice and princess Eugenie was removed following public controversy over the cost, then estimated at £500,000 a year.,

PERHAPS HARRY AND MEGHAN MIGHT SPARE A THOUGHT FOR THE MILLIONS OF PEOPLE WHO DESPITE STRUGGLING WITH INCREASING AUSTERITY HAVE CONTRIBUTED TO THEIR COMFORTABLE LIFE STYLE.

Vulnerable people are being forced into homelessness by government policies and lack of affordable housing. The Universal Credit system has created delays of many weeks in people receiving the benefits for which they are eligible, resulting in loss of tenancies and homelessness. Young people and children are  increasingly reliant on ever diminishing social services and exposed to drugs and alcohol, sexual abuse and even trafficking as a result. 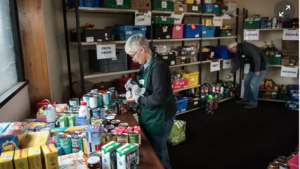 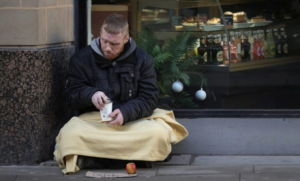 9,000 PEOPLE ARE HOMELESS AND SLEEPING ON THE STREETS, MANY OF THEM VETERANS.

A glance at Harry’s father’s heraldic crest and motto  Ich Dien, ‘I SERVE’ is a reminder that it is not ‘I SERVE MYSELF’. The royal family reigns only by the goodwill of the people. Harry is only too aware of the restrictions the royal role imposes however it seems clear that Meghan feels unsuited to royal life and Harry is faced with an impossible choice. Lets hope that it is one he does not regret. We must respect their right to choose how to live their lives and wish them well however to earn  that respect they must surely  leave behind the privileges which have seemingly burdened them, including one would hope, their royal titles. Opinions differ as to the need for a monarchy but even the most radical republicans would grudgingly admit that the queen is deserving of their respect after a lifetime of service.