In 2015 Canada’s  5 year Truth and Reconciliation Commission delivered a scathing rebuke to the catholic church along with Protestant denominations entrusted with the care and education of  thousands of indigenous children for more than a century. The Canadian government formally apologised ten years ago for the colonial ‘assimilation policy’ later described as  ‘cultural genocide’ by the  Government 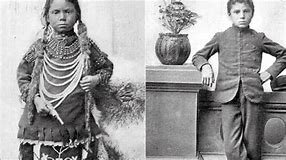 Commission.  For decades children were forcibly removed from their parents and placed in Indian residential schools mainly under the care and control of the catholic church. Under a regime designed to strip them of every vestige of their  cultural heritage they were subjected to continuous and barbaric  sexual, physical, mental and emotional abuse. Children were stripped of native artefacts and clothing and forced to wear western dress, their hair was cut short and they were not allowed to speak their native language. 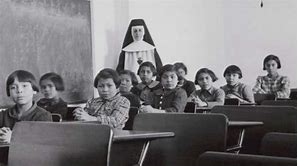 Christianity was imposed and traditional native beliefs outlawed. Mortality rates reflected the abuse with many buried in unmarked graves, many others simply disappeared.

The dislocation of indigenous  families and 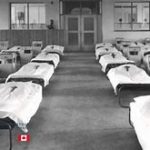 communities was complete, those who returned to their families found it impossible to re assimilate  to what had become for many an alien culture they could not accept and where they were rejected.

The Truth and Reconciliation Commission reviewed the consequences of the legacy of the residential school system and in 2014 made 94 ‘Calls to Action’; one 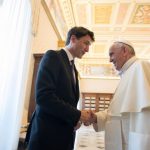 of these recommended a papal apology delivered on Canadian soil. Justin Trudeau the Canadian Prime Minister lobbied for this when he visited the Vatican in May 2014.  In December the  bishops of Saskatchewan issued a further invitation to the pope.The question of a papal visit had not been on the agenda when Canadian bishops held their annual plenary in Ontario in September. Bishop Douglas Crosby of Hamilton, Ontario, outgoing  president of the Canadian Conference of Catholic Bishops said in October  “the matter had to be considered carefully because it can be really expensive…. ”  When bishop  Lionel Gendron became president he said the bishops were in a process of ‘discernment’ regarding a papal visit. In March 2018  bishop  Gendron, confirmed that Pope Francis would not be delivering an apology: ‘after carefully considering the request  and extensive dialogue with the bishops of Canada, he (the pope) felt that he could not personally respond”

Bishop Gendron added, ‘a future  papal visit to Canada may be considered”… stressing that reconciliation   “remains a major pastoral priority”… “We look forward to a future where systemic injustices are meaningfully addressed, where we all discover new ways of living together through which the 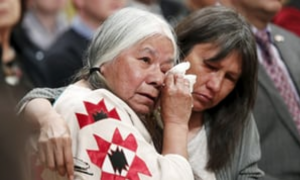 First Peoples of this land are honoured and respected,”  “We have heard your invitation to engage honestly and courageously with the past, to acknowledge the failings of members of the Catholic Church, and to take active steps of solidarity with indigenous peoples toward a better future,” he wrote.  Bishop Gendron’s statement only proves that the invitation has not ‘been heard’ for hearing requires listening. Reconciliation is dependent upon acceptance of wrong doing, this is not the same as looking forward to a happier time. The pope as the head of the church symbolises and carries responsibility for its actions and their outcome. The comments of the catholic hierarchy are a sad reflection of their inability to acknowledge either.

The Pope’s decision pushed an all party vote in the Canadian parliament on May 1st 2018 to renew the invitation to Pope Francis to apologise on Canadian soil. It was carried by 169 -10. and  also calls on the Catholic Church to pay money owed to residential school survivors and to turn over relevant documentation regarding the government-sponsored schools. Perhaps the comment by bishop Cosby concerning the invitation to apologise ( “the matter had to be considered carefully because it can be really expensive.”)  is telling. It serves as a reminder of the expense which will or should be incurred by the catholic church in settling the many court actions by survivors of abuse which would follow an admission of guilt and yet without it healing can not begin. 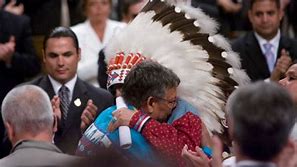 As the bishops and indeed the pope ponder on discernment, a definition of which is ‘sharp perception based on wisdom and justice’ we are humbled by the dignity of those who have not only suffered but have been ignored for so long. While financial compensation can never restore the lost childhoods and lost families it could begin to restore the dignity of the church.